It's over, apparently.  I saw the Daily Randonneur's post for his last coffeeneuring trip of the season and thought, "uh oh, maybe time's up, I should have paid more attention to the schedule."  He should know as he is married to Mary, the Chief Coffeeneur.  So I went back to the announcement and, sure enough, it ended on November 19, the evening I saw the post.  So I narrowly missed it but here is my report for the history (of coffeeneuring) books.

My first coffeeneuring trip was an early morning ride, starting in the fog, with remarkably little traffic.  You say there shouldn't be much traffic at 5:30 AM but there is some and there wasn't any that day.  Full report is here.  In case you don't follow the link, here is what sunrise looked like: 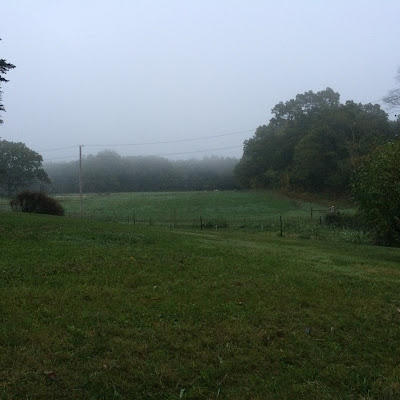 My second coffeeneuring trip was a weekday trip, taking advantage of new rules as of 2016:

Just a shot of espresso on my way to work. This is #coffeeneuring number 2 for the season at Barismo in Cambridge, MA, one of my favorite shops for a quick shot of caffeine.
A post shared by NEBicyclist (@svillecyclist) on Oct 27, 2017 at 6:13am PDT


My third coffeeneuring trip was a ride from Concord to Harvard with my friend Carl.  Concord is approximately the midpoint between our homes and starting there made for a pretty short ride to Harvard.  We had very cold weather to start but the day warmed up so we could enjoy coffee outside.

Coffeenneuring #4 was also a weekday coffeeneuring with a shop relatively new to me:

#coffeeneuring 4, Longfellows in Cambridge, MA on my Surly, fresh from @ridestudiocafe who tightened it all up. It’s still a new bike to me.
A post shared by NEBicyclist (@svillecyclist) on Nov 7, 2017 at 6:18am PST


Coffeeneuring #5 was a nice dirt and paved road ride, including the Reformatory Branch Trail and Battle Road along with a great latte at Ride Studio Cafe.


Next, I used the "friend's house as a coffee shop" rule and rode to East Cambridge for a coffee and a great long conversation with Paul, who has joined me on a least one coffeeneuring trip, although he doesn't join in the challenge.  I left just in time and made it home in the dark and as the rain was about to get me really wet.

Urban #coffeeneuring 6. At a friend’s house in East Cambridge talking about cybernetics and how we didn’t listen to Norbert Werner’s warnings.
A post shared by NEBicyclist (@svillecyclist) on Nov 18, 2017 at 2:15pm PST


And, finally, I missed the ending date but still made time for an espresso at NOCA (North Cambridge) Provisions, which was worth the stop:

This was planned to be #coffeeneuring 7, at NOCA Provisions in, well, North Cambridge. But I didn’t pay attention and the clock ran out on me. That said, it’s a pretty tasty espresso.
A post shared by NEBicyclist (@svillecyclist) on Nov 21, 2017 at 5:45am PST

Mary asked me to make the maps again and I happily worked with her on the maps.  Mary adds the data and I've been hosting the maps here.