It was a very good year

My cycling year is done.  Except for a December commute, I've been mostly running and just starting to use a trainer in the basement.  But it was a very good year.  I had no specific goals but hoped to come close to the 2200 miles I rode last year.  I ended up riding over 2800 miles, which is the second highest mileage I have recorded.  There was that year that I rode 2000 miles to Cape Breton and back and commuted by bicycle (an 16 mile round trip) for several months before the tour but that was long before I was aware of convenient bicycle computers and can't be sure of how far I rode.

It was a great year of cycling.  It was fueled in part by training for the Ride Studio Cafe's Highpoint Ride, an out and back (from 4 starting places) to the highest point in Massachusetts, Mount Greylock.  The ride turned out to be a blast. 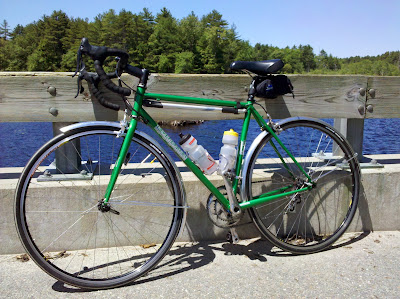 But the year started out well after I went out and bought a better lighting system for my bike: a Busch and Muller IQ CYO 60 lux headlight and Spanniga Pixeo taillight, all powered by a Shimano 3N80 dynamo hub on a wheel built up by Harris Cyclery.  It gave me the chance to do a number of night rides and leave for morning rides well before sunrise, something that grew difficult last year with a battery powered light.  All of those early and late rides gave me a nice base to start to do longer rides.  I think the optimal ride is 50-60 miles and I managed 15 rides of at least 50 miles this year.  I think the average mileage for a ride on my IF was 45 miles.

The lights also came in handy for commutes.  With all of the bicycle/motor vehicle crashes, I wanted every chance to be seen.  I had my lights on for most commutes, even at 8:30 on a sunny mid summer day.  And I felt safer.  In fact, I am now setting up my IF for generator lights.  For now I will use the one wheel but it makes sense to not move lights between bikes.

A friend's wheel after contact with a concrete barrier, after being cut off with a right hook: 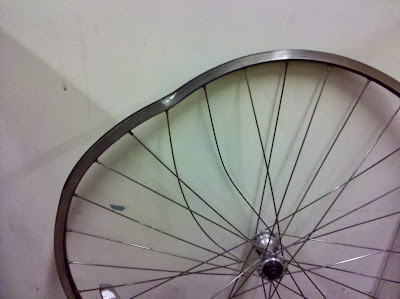 Some of my more memorable rides this year were off road.  These include Ride Studio Cafe's Diverged Ride, of which I did about half, along with some commuting to and from the ride.  It was my first organized ride off road and it was fun but I don't have the best bike for it, although a new set of tires would go a long way if I wanted to do more riding like that.  I had the chance to test ride Lovely Bike's Rawland and wrote about the experience.  I also did the mini-D2R2, the Green River Ride, with several friends.  The  ride was a lot of fun but it is nothing like the hillier D2R2 routes.  I did the 2009 version of the 100K and this ride was far easier.  I finally explored Thorton Gap by bicycle.  The gap and Tripoli Road have been on my radar for years.  And, finally, I did a 30 miler out to Concord and back that included 12 miles of trails of various surfaces.  It was great fun and served as my coffeeneuring training.

Experiencing how dirty a bike can get: 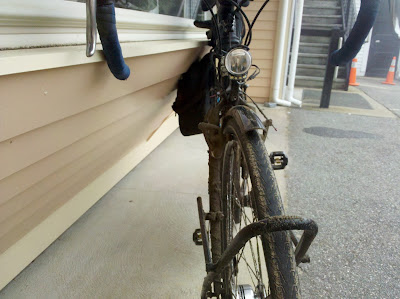 I did try to complete MG's coffeeneuring challenged but failed to get out of the house enough.  Nevertheless, it was great fun trying and by virtue of the maps I made, MG made me the New England Regional Office for the challenge.  Working with MG to make the maps was almost as much fun as the riding.

I have no specific goals for next year.  I'd like to ride as much as this year but that is highly dependent on scheduling that I don't always control.  The D2R2 was fun and at least a couple of my companions are interested in doing the Green River Ride again so I may do it again.  Ride Studio Cafe may do a similar ride to the Highpoint Ride.  I'd like to do it if possible.  They planned and executed a great ride this year.  Other than that, I'd like to commute more, even if just getting to the train by bike during the winter.  I'm also interested in doing more 50-80 mile rides in western Massachusetts.  I have done a lot of riding out there and have no shortage of ideas for routes.  Hopefully I will find time to ride a few of them.

Lights on for safety: 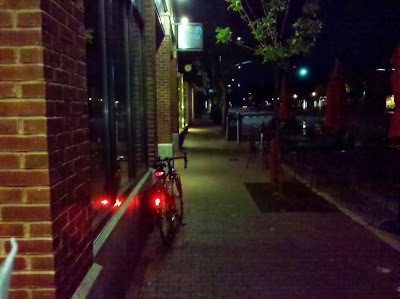 I've been running some since the 5 miler I ran on Thanksgiving.  It's fun to get back into it, even if it means getting out of bed at 4:30.  I'm not my usual regular self (six mile runs, four to five days a week before children) but I am developing a habit.  That said, I seem to be checking out the cycling conditions while running.  Today looked like a studded snow tire kind of day.  Sidewalks were treacherous (sort of, but only if you weren't careful) and the bike path was snow covered and slippery. A local rider agreed about the proper tires:

That's not what is keeping me off my bike, however.  It's the sloppiness of the roads - salt ready to corrode my frame and all of my components.  So I'm looking for a cheap bike to get me to the T.  I'll use battery powered lighting since my commute would be largely bike path, and short enough to walk home if the lights failed me (read: I may forgot to charge them).  My wife offered her ancient Miyata, which sees very little use these day.  But even with that bike, I need clean roads and paths unless I get more appropriate tires.  The temperature is fine for me, if I dress well.

In other news, I've been working very slowly on getting my Independent Fabrication road bike ready for next year.  I've been thinking of two things, longer rides in changing conditions and lighting.  For the latter, I now have an identical headlight (Busch and Muller Lumotec IQ CYO 60 lux) on both bikes and have a Busch and Muller Secula Plus ready to mount on the IF.  The front fender is currently off the bike, since the longer break bolt (through the fork) to accommodate the headlight mount is too wide to fit the daruma.  So I now have an L bracket that I need to mount.  I also have a new set of leather washers, which I will replace all around (3 years seems to be their lifetime).  I also will finally cut the fender stays, which weren't cut by the folks who originally mounted them (and I had to remount them to lift them off the fork, where they were grinding into the paint - ouch!).  Once all of this done I have to decide on how to power these lights.  At a minimum, I will be moving the Shimano E80N/Mavic Open Pro wheel from my Surly to the IF when I want lighting for that bike.  A second, more expensive option is move that wheel permanently to the IF and buy this slightly less expensive wheel from Harris.  For more money I could add the same 3N80/Open Pro wheel to the IF.  For even more money, I could have a Schmidt SON hub laced to a Mavic Open Pro rim.  That would best match the IF.  I would get it in black to sort of match the DT Swiss 240s hubs on the bike.  It would also be lighter and more efficient than the Shimano hub.  The goal here is safety.  With the rash of cars hitting bikes, I'd like anything to help the cars notice me.  I've been very happy using daytime running lights on Surly on my commutes into the city, with the sun shining or not.

Working on the front fenders stays is for aesthetics but the rear is so I could accommodate a rack, like this Tubus Fly.  Alternatively, I've also been thinking of a very large (in my experience, small in the maker's words) seat bag like this one from Dill Pickle.  Both would extend the kinds of days I could ride a longer distance.  We aren't talking 200KM rides but 60-70 miles in the Berkshires on a cooler day that would require more clothes at the start of the ride.  All of this is in the future but it's best to do it now, not a few days before I have the opportunity to ride some big hills next spring.

Once Daylight Saving Time ends in the fall, commuting gets dicey, at least in my family.  My wife is not a fan of me riding at night, which is reasonable considering car traffic around here.  I'm more apt to do a recreational ride at night in very low or no traffic areas than ride through Cambridge during the dark, evening commuting hours.  But there are days, like today, when riding is worth it, even if it means getting home in the dark.  Today I had an early obligation that would have conflicted with day care drop off, if I were driving.  So I rode.  And I was on time.  In fact I was just ahead of the person I would be working with while riding in on the Beacon/Hampshire Highway, unbeknownst to both of us.  I finished the ride at close to 13 mph, which is a commuting record for me. So riding in the morning was just fine and it saved the day for me at work.

The ride home, however, was a completely different story.  I left a bit early but with the light drizzle it was already pretty dark and the roads were starting to get wet.  I had all my lights on and wore my reflector vest and my tires have reflective sidewalls.  It was a safe ride home but only because I was cautious to a fault - it must have taken me close to an hour to ride 9 miles, with stops for lights included.  I also adjusted the route to avoid a stretch in the woods.  I normally ride it in the dark but I thought it would be too slick with the day's precipitation so I saw more cars than I normally see later in my ride.  I made it home safe and sound.  My average speed dropped to less than 11 mph but that is a decent average for commuting.