There is a concept or movement in cycling called vehicular cycling, in which  the cyclist acts like a car driver - depending on the state, both a driver and a cyclist are operating vehicles so this isn't a stretch - and "takes the lane", particularly when it isn't safe to ride between parked cars and the lane of moving vehicles.  I largely don't take the lane as a cyclist, unless I need to and the traffic is moving slow enough that I am not a hindrance to other vehicles on the road.  But I do it, particularly in Cambridge, and specifically when I am taking a left turn and have to safely cross the lane/s to make the turn.  I don't subscribe to the vehicular cycling movement and believe that bicycle lanes and bicycle tracks makes sense for both experienced and novice cyclists in dense urban areas.  I generally avoid bike trails, like the Minuteman trail, in the 'burbs when traffic on the trail is intense, which is most weekends spring-fall here.  But in the city, I gravitate to bike lanes and trails.

This evening I saw a couple of cyclists taking the lane and it was certainly a case where it was something I would do the same.  I was approaching Porter Square from the east on Mass Ave and traffic was moving slowly.  I noticed the cyclists right away.  It was a mom and child.  The child was on a trail-a-bike.  I snapped a picture when we were waiting for a light and chatted with them.  The mom said that she had been doing this for a couple of years, since her son was 4, and both of them enjoyed it.  They looked like they were enjoying themselves.  They were talking and singing as they inched along with the traffic flow.  And with the recent northeaster, there was a lot of snow on the edge of the road and there still was a row of cars parked along Mass Ave, which effectively eliminated any space for a cyclist except if they were in a lane of traffic.  No one seemed to mind that they were on the road and they certainly kept up with traffic.  I didn't notice any lights (though they may have had some) but the surrounding cars seemed to respect them and give them their space.  It was nice seeing cyclists and drivers getting along.

Their bikes were nothing special.  Mom's bike looked like a re-purposed mountain bike with a front rack.  They both had backpacks.  Mom had a great pair of tall rubber boots.  And they looked comfortable.  Here they are: 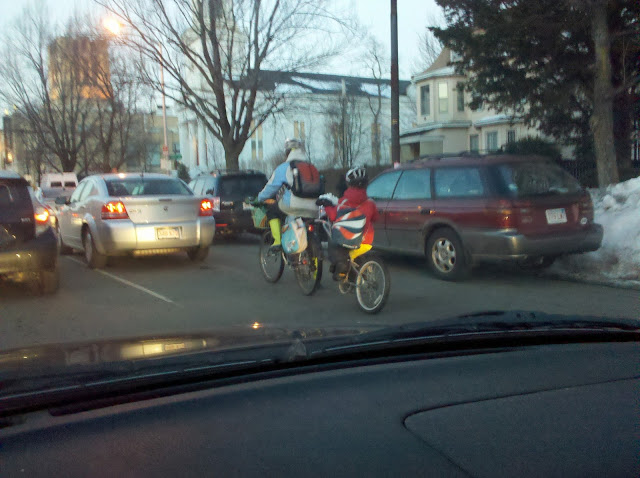 I was walking home with the family at the beginning of winter storm Nemo (getting out of the house when we could because it will be hard tomorrow), we were counting snow plows.  We ended up seeing 23 on our mile walk home.  We also saw this mixte: 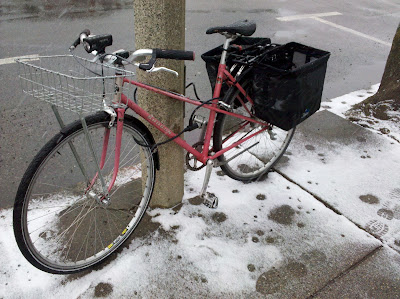 It looked like a great commuter, errand bike with a front basket, rear rack with baskets, and a nice front light.  It is a single speed or fixed gear.  It did look like a nice bike and also looked very familiar.  And now I see where I saw it before.
Posted by New England Bicyclist No comments: