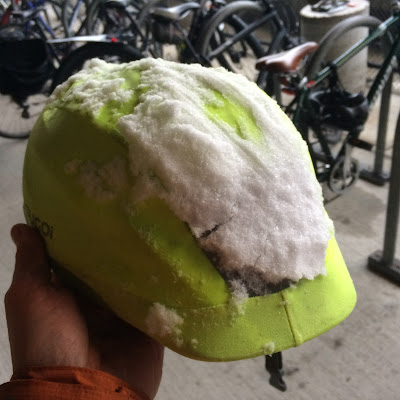 The winter is over in two days.  That said, the temperature this morning was below freezing and a big snow storm was in the forecast for tomorrow evening, although that forecast is now in flux, fortunately.  Besides winter officially ending tomorrow, so is the Freezing Saddles contest.  I haven't been participating it officially, but it was fun measuring how much I got out on my bike this winter using their point system.  Officially I would have had to use Strava, which I barely do, despite a great argument in favor of using it shared by one of my favorite bloggers.  Besides not using Strava, I wasn't part of a team, so I really didn't qualify.


My results: 605 miles in 40 rides for 1005 points.  Most of those rides were commutes to work, 37 of them.  Five of the 37 commutes were short trips to Alewife when I didn't want to ride in the city (it was snowing all day on two of those days).  I also took three road rides totaling 114 miles.  I did manage to get on my road bike once in each of the three months of the challenge.  Those 605 miles are the most that I ever rode during this time of the year.  It helped that the weather was far more cooperative this year than it was during last year's snow-pocalypse.  I had intended to ride through that winter but an unfortunate but minor accident kept me off my bike for the worst of the snow.

Another measure of winter riding for me is counting how many days I rode to work during daylight savings time.  That's an important measure since I need lights for those days and it's usually much colder during that time (most of the period is during meteorological winter).  Of the 76 days that I went to work, I manage to ride 63 of those days, which is pretty consistent for me in fair weather (I'm a fair weather cyclist, after all) and quite good for less than fair weather.  I'm pretty sure I was a slacker and skipped riding in the rain or cold on most of those days but a few were for errands (usually picking up the boys) that I simply can't do with my commuter bike, or on any of the bikes I own.

Overall, I believe I rode more than 1,200 miles during a time of year that I didn't ride at all in the past.  Not bad for the freezing saddles season

A lot of lux and lumens available on this bike. #earlyMorningRides #coldiscool
A photo posted by NEBicyclist (@svillecyclist) on Mar 19, 2016 at 7:51am PDT

Getting through the winter on my bike

I'm still riding my bike, despite the season.  While it's been a warm winter, there have been some very cold days and snowy days along with some very mild ones.  In February I rode 210 miles.  Most of that was commuting but I did get out for one very nice road ride last Sunday.  The previous weekend was spectacular but I was spectacularly sick and spent most of it in bed.  I was 14 of 20 days for commuting for the month.  That includes three days that I rode only to Alewife and included two snowy days.

My numbers for Freezing Saddles are pretty low, 360 points for last month and about 760 points for the season.  Translated to miles, that's about 450 miles.  I'm still barely on the leader board but I'm pretty happy doing what I'm doing.