A not very beautiful picture of a beautiful frame: 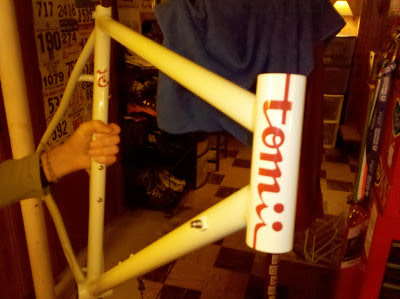 I got to see B's new frame and enjoy a local beer (batch #6) with him.  It was a nice evening and it was fun to see this amazing frame.  I can't wait to see it built up.

You can't tell from here but the paint is a very light green that's been described as mint or cucumber.  In any case, it isn't too subtle and it is sharp with the red on the head tube.  The badge, if you could call it that, is on the stem and is quite nice - a panel of polished stainless steel with Tomii's signature in matching red etched deeply in the steel.  The fork with front rack is light and elegant.  There is a lot of details in the frame,  including the crown-like cutout on the top of the seat tube.

It is the first fillet brazed frame I have seen close up and personal.  I like the effect.  I'm a fan off TIG welds, particular the picture perfect welds on Firefly and Seven frames but this kind of construction is appealing to me.

More pictures are on the Tomii blog and on his Flickr page.

Prolly posted about the bike here.

I guess you don't need a license to ride a bicycle

I was driving into town on Thursday, which was the coldest morning of the year.  I saw a warmly dressed rider traveling west on Broadway.  I commended him, silently, for getting out on such a cold morning (8F),   Commutes have been quiet since the 26th so I didn't expect this rider to keep up with me in my car, as usually happens on this stretch of normally busy road.  But he somehow kept getting past me, at lights.  Yes, he ran every red light he came to.  Now it was a cold morning but I didn't think that laws were relaxed on such days.  I could be wrong.

On my way home I passed a rider on Bishop Allen Drive. I  gave him plenty of room, as much as I hope to get from drivers (though never do).  I stopped at the stop sign at Norfolk, behind another car.  I gave the rider some room on the right, assuming he would come on that side. I guess he didn't want to stop at the stop sign so he passed both me and the car in front of me on our left and cut right across the intersection, missing the car we were stopped for.  I guess it was still too cold for paying attention to traffic signs.

I generally don't care what others do on their bikes but this kind of behavior reflects on all cyclists and while this is no excuse for drivers to take out their frustrations on cyclists, it certainly engenders disagreeable notions of what every cyclist is like.  And it's not how I ride.
Posted by New England Bicyclist No comments:

I have been thinking about getting a dynamo hub lighting system and found some decent resources:

Perhaps the best in a web site by a writer from the Netherlands.  I found his reviews to be the most complete  and fact based around.  He pays attention to email and was generous, humble, and clear in his response.  He sells some products, in particular the SP hubs, which I hadn't known about previously.  While he sells the SP hubs, he is not afraid to praise brands he does not sell.

I also appreciated Peter White.  His web site is filled with useful information, if sometimes a bit hard to find.  He is slow to give detailed responses to email but was generous in his time on the phone.  I'd love to check out his shop and see his lighting demos.

I thought that Harris Cyclery was very helpful.  I spoke with Elton, who I believe builds up their custom projects.  Elton gave a pretty rational and unbiased assessment of the difference between the high end Shimano hubs and the Schmidts.

I appreciated Gravel Bike's review of the Shimano DH-3N80 hub.

I'm not sure what I will do yet but it has been fun learning about modern dynamo hubs.

I was lucky to receive a free, signed copy of Just Ride by Grant Peterson.  He was commenting on a blog post about his book and offered free copies to the first 10 respondents.  He later said that he gave away 30 copies and I was one of the lucky ones.

Both Grant and I have been riding for some time with Grant being the elder, perhaps.  His experience is pretty different than mine, having made his living in the bicycling industry while I have been a consumer.  He has also used bicycles for transportation far more than me.  He had his first big tour in 1976, mine was in 1985, although I did a couple of week long tours prior to that.  He is living the dream while I just dream.

The book was a fun, quick, and easy read.  It's organization around discrete topics makes it an easy reference and easy to pick up.  I have to say that I agree with a lot of what he says and my bicycles reflect some of that similar thinking.  I do have a couple of disagreements, however.

Helmets: I believe they are pretty useful.  I've seen helmets dented in a fall and have to imagine that the owners of the those helmets would have been worse for the wear without a helmet.  I've seen falls in many places and while I could care less about convincing those who think that they need helmets only on fast rides or only at night or not at all, I am convinced that I always should wear one.  Heck, they are light and I hardly notice it on my head.  He should stick to his guns and use it when he thinks he needs it and I hope he is right. I'll continue to use my helmet.

I also disagree with Grant regarding cycling clothes.  I always wear cycling shorts, whether on long rides or my 14 mile round trip commute.  Good shorts are comfortable while you are on your bike.  I also think jerseys work well in warm to moderate temperatures and the pockets are useful if you aren't using a decent size bag of some sort, which is true for me a decent amount of time. I wear my cycling shorts under my street clothes when I am commuting.

Otherwise we tend to be of like mind.  One of my bikes has narrower tires than I suspect he would use (25mm) but both bikes fit me, having been fitted by Roy from Grace Bicycles.  I think having a well fitted bicycle, when you can afford it, is far better than a close-ish fit.  Having high handlebars may take the pressure off of your hands but you can get to a good weight balance without compromising your ability to crank when you want to.

I also don't think of myself as an unracer - I'm just a bike rider.  Sometimes I commute on my bike, sometimes I go for long rides, some times I go for long, fast rides (long being relative, of course) but I don't compare what I do with racing.  I do use some technology developed for racing and my bike has some history in racing, although not recent history.  Having the focus on un-racing is an odd choice for someone so entrenched in other kinds of cycling.

I'm sure one could find many details to disagree with but I'd rather not and not because he gave me the book for free.  Instead I prefer to to learn from any differences we might have.  I've been proven wrong before and I'm happy to learn something new.