Bike accidents in Cambridge, hard to say anything about intersections

Being a somewhat frequent bike commuter and a geo geek, I thought it would be interesting to look at the Open Data Discourse contest on designing better intersections.  I made a couple of maps using Google Fusion tables and then used QGIS, an open sources geo tool, to look at a specific intersection that I encounter on my commute home.  I usually avoid this intersection on the way in, mostly because Beacon Street in Somerville is a mess now, at least while they fix it up for a hopefully brighter bicycle commuting future.  By the way, Somerville Ave to Webster is now a fine route, especially since the city painted the bike lane not so long ago.

The intersection in question, Hampshire and Cambridge, is quite the intersection - a lot of cars use it and the length of exposure (at least on a bicycle)  from beginning to end is substantial.  I rarely have come into the intersection from Cambridge St so I can't speak to what a cyclist faces there but I do have strong opinions on heading into the intersection from the east on Hampshire.  First, you face a long column of cars in stop and go traffic, frequently leaning towards much more stopping than going.  This section is protected by a bike lane but there is active parking on the side, so there really isn't much room if someone opens their door without looking first.  I approach this section very cautiously, especially after sunset.  Once I get to the intersection,  I am stopped by the light.  I seem to rarely make this light and with the quick yellow light here I approach it slowly.  Once the light changes, everyone, car drivers and cyclists, have to be patient with the long line of cars heading E (or NE) on Cambridge St to run the red light.  This is likely a significant cause of the back up on Hampshire, since a good 5-10 seconds of the light is always wasted on the lawbreakers on Cambridge.

So my original assumption, of a narrow bicycle lane bounded on one side by frustrated drivers is clogged lane and on the other by parked cars, is a decent cause of car/bicycle accidents for a significant distance, commonly as far east as Windsor St, and bad behavior at the Hampshire/Cambridge intersection.  I made a map here, with only the car/bicycle accidents (object1 and object2 columns in the original data) and only for what I consider the heaviest commuting times (4-7PM, Monday through Friday) and here is what I see (the background is the Open Street Map layer available in QGIS): 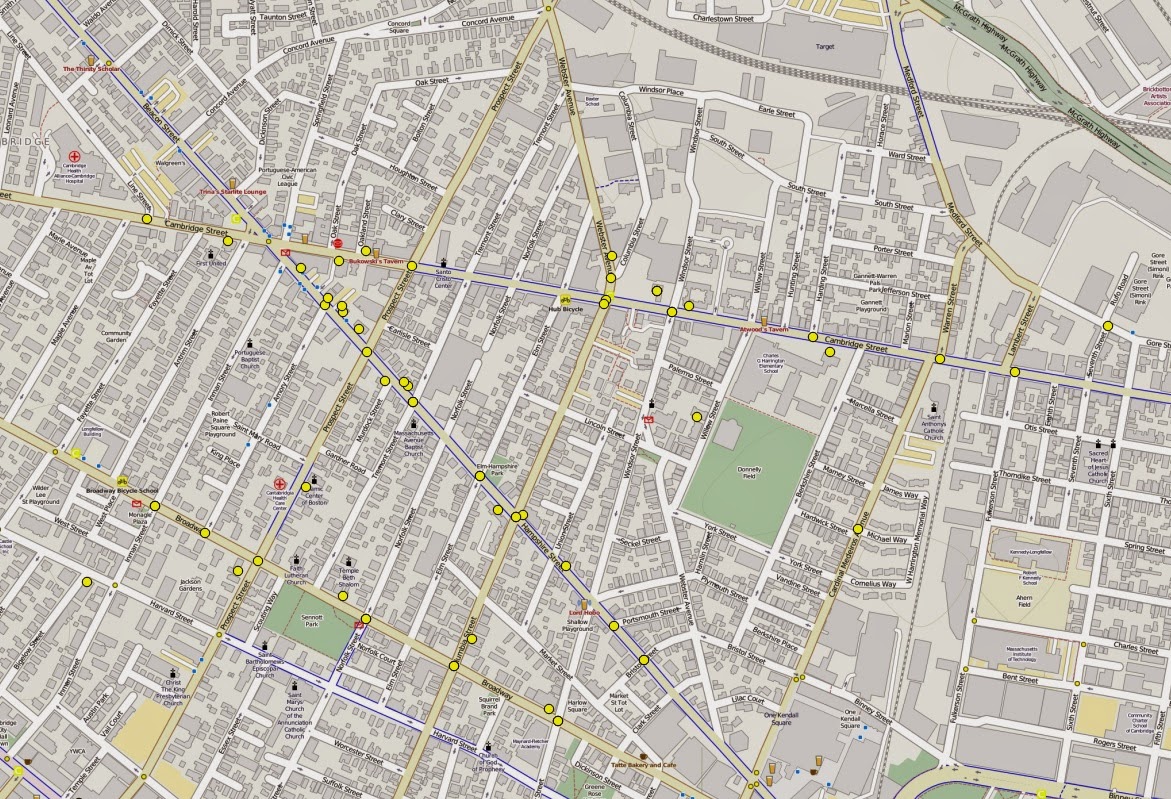 Right click and open this is in a new window to enlarge the image.

The majority of accidents are where I would expect them to be but I don't know much more than they were car/bicycle accidents.  For instance, I fear dooring in the narrow corridor with stopped traffic but I also have experienced near right hooks many, many times.  All of these right hooks were avoided because I assume people won't stop (and they don't) but others may not be so lucky and less cautious.  I also don't know if the accidents at intersections in this area are east or west bound so they may be irrelevant to proving my hypothesis.  Finally, I know of accidents that don't appear in the data set and wonder how this affects the map.

I have only one suggestion, Cambridge should continue to make driving a less desirable option and make other options more viable.  Having as many cars on the streets as Cambridge has leads to slow driving which often leads to stress and bad decisions.  I don't know how of these play into the issue of this single intersection but I can say that none of those car/bicycle accidents had to happen and the intersection is over utilized.  Cambridge limits the amount of parking for newly developed workplaces but this still adds to the total number of people coming into Cambridge to work.  They somehow need to reduce the total number and that can be done only if there are viable options to driving.  That's something to work on with the MBTA and others.

Finally, I wish that a more complete data set was available.  Check out the NYC data available here:

This isn't a perfect data set but it does give contributing factors for one or more vehicles involved for many of the accidents.  This data set, and the Cambridge data set, could be vastly improved by a simple statement of what happened: a dooring, right hook, impact, or whatever.  Trying to improve an intersection without knowing how it doesn't work doesn't seem altogether possible to me.

You can download my version of the Cambridge data, with sunrise and sunset times, here:

The contest is over but it remains an interesting data set.