By now I have rode over a number of White Mountain notches (or passes or gaps or whatever they may be locally known as) including:

(Please remind me of others I should try in the comments.)

It's no accident that I have been up Bear Notch so many times.  First, it's a short ride.  You could do a loop that includes Bear Notch in less than 40 miles.  Second, it's hardly the steepest or longest climb in the Whites.  Third, it's pretty road and probably the least traveled of the southern notches in the Whites.  And the pavement is decent for a road bike.  I first rode the Notch in 1998 coming back from a conference at Sunday River.  I had my bike with me for the conference and I rode a couple of times in Maine, mostly in the middle of nowhere.  On the way home I thought of riding in the Whites, not having done so in 11 years and here was my chance.  I recall finding the routes from a state highway map but it worked for me.  I left my car near the Eastern Slope Inn and found a great route for cycling.  I recall that the ride was in early October and the higher elevations on the north side was leafless while the south side was already past peak foliage but a lot of leaves remained on the trees.  No problem - it was still a lovely ride.  I stuck to that route for the several times I rode over Bear Notch.  Here is the route, with a narrative from my most recent ride over the notch, last Friday.

We were staying north of North Conway with my wife's family.  My wife came late and my fabulous mother-in-law (and many others) offered to take care of my boys on Friday so I could ride, an offer I couldn't refuse.  After breakfast and some playing, I took off.  I rode south on NH 16 until the lights and then took River Street to West Side Road to Route 302 and then Bartlett.  Route 302 has a wide shoulder but is quite busy and the cars are fast so Westside Road is worth taking, despite the rollers that slow you down as you get closer to Route 302. I met a couple, Christine and Barry, on 302, after seeing them head north on 16 as I headed south.  They were doing Bear Notch and then Kancamagus Pass in training for a fall triathlon. 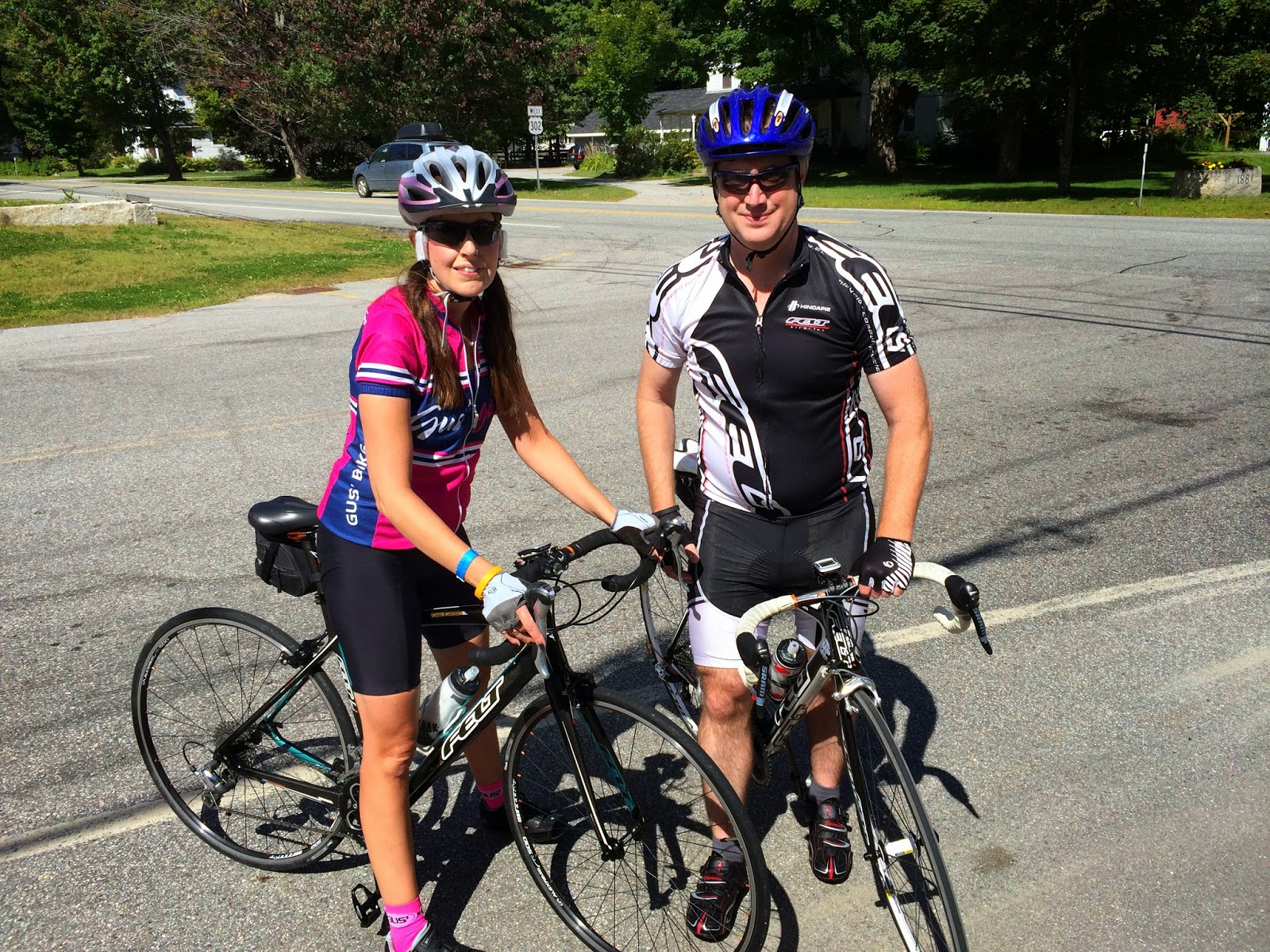 From Bartlett, I took Albany Avenue, which turns into Bear Notch Road in the national forest.  The climb is about 4.5 miles and not all that steep with a couple of turnouts with nice views looking north.  The road is closed for the winter. 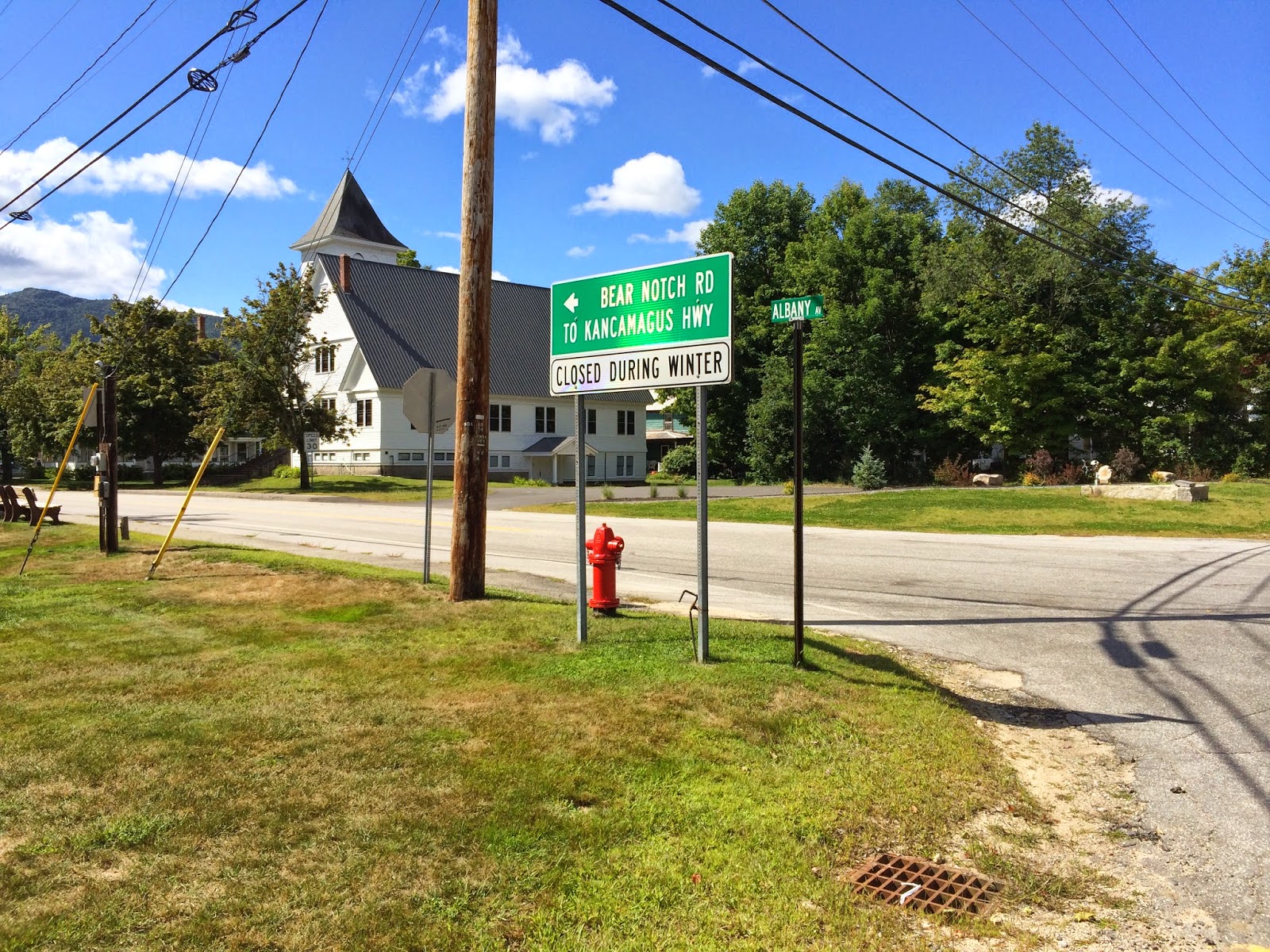 This is New England, where we are coddled with guard rails everywhere and signs that warn us that we are further than a gallon or a gallon and a half of gas from the nearest service station. 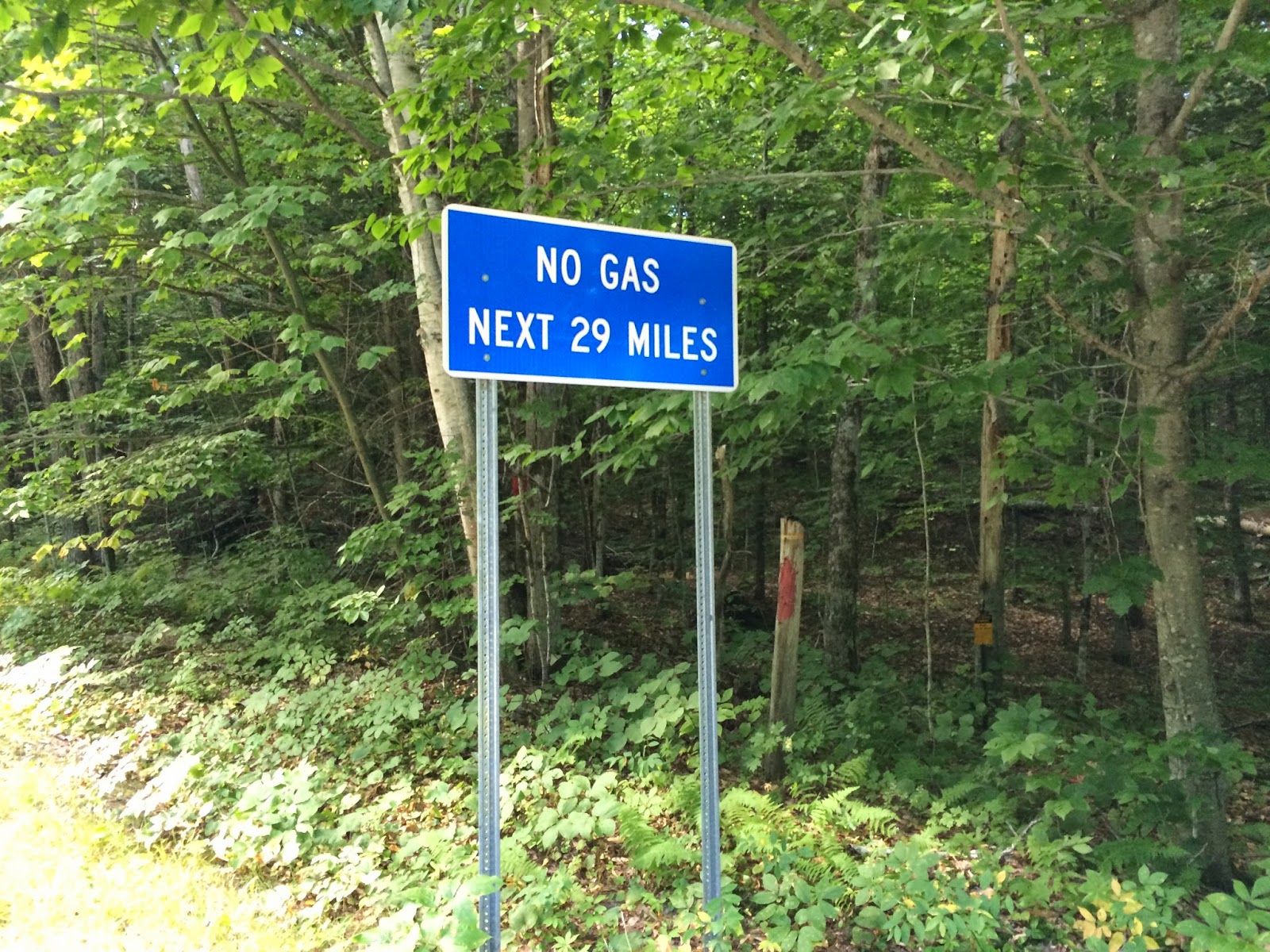 My White Mountain bike.  I had my lights on and had one rider stop me to ask about my lighting system.  No problem climbing 10 MPH up Bear Notch with the generator running. 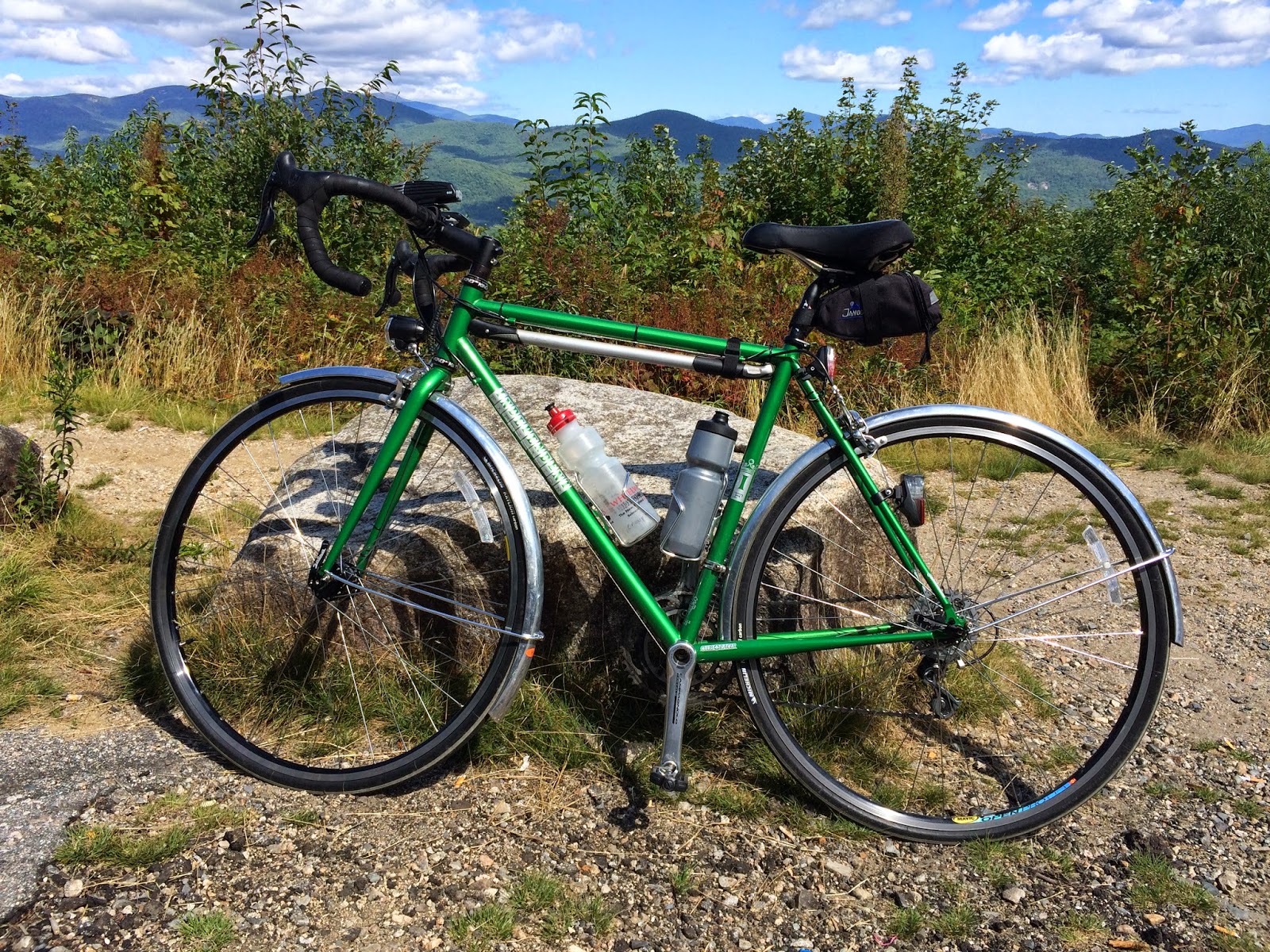 From one of the turnouts, looking north.  The Presidentials are the peaks in the distance. 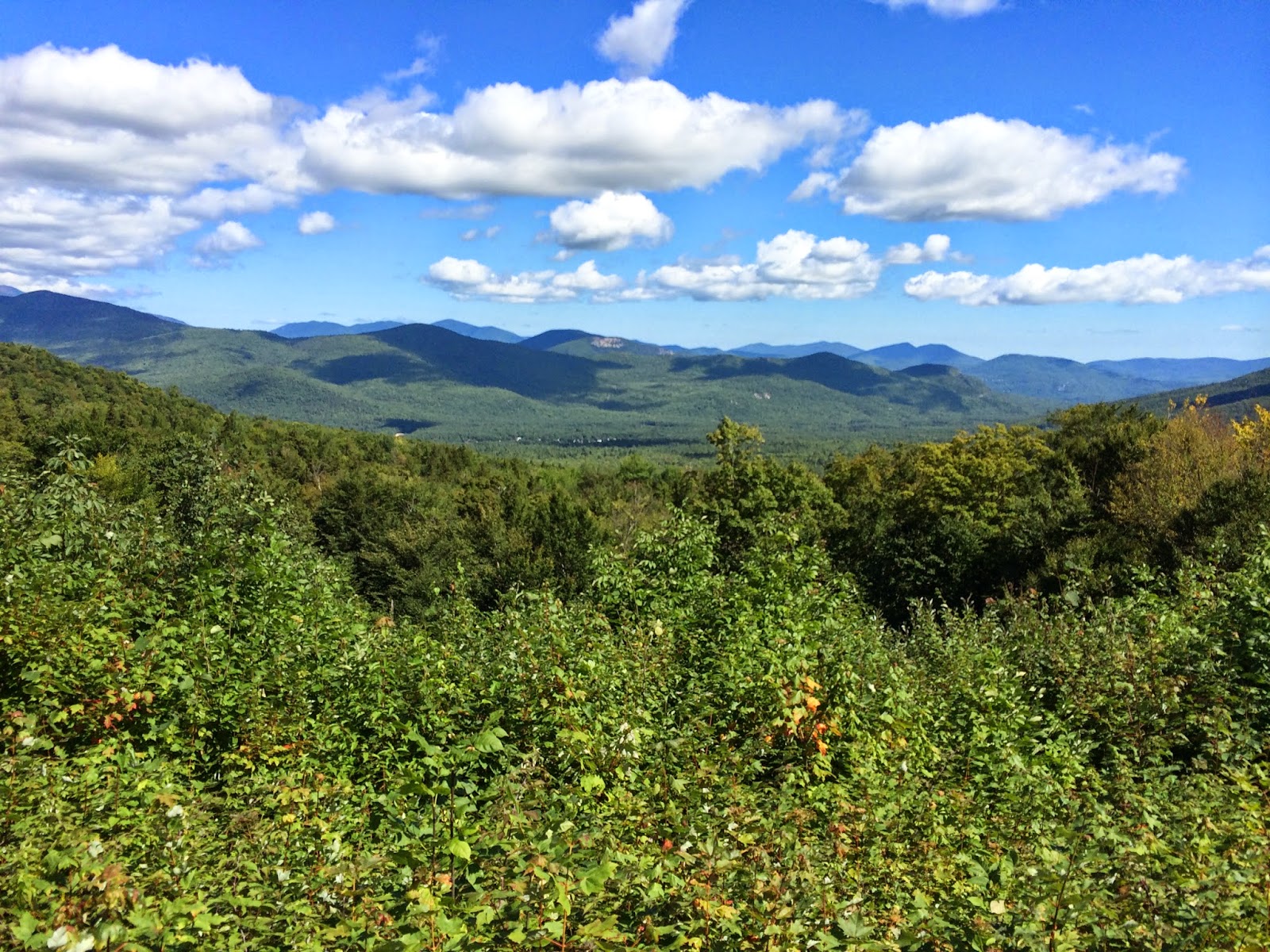 Here is the summit.  No signs mark the spot. 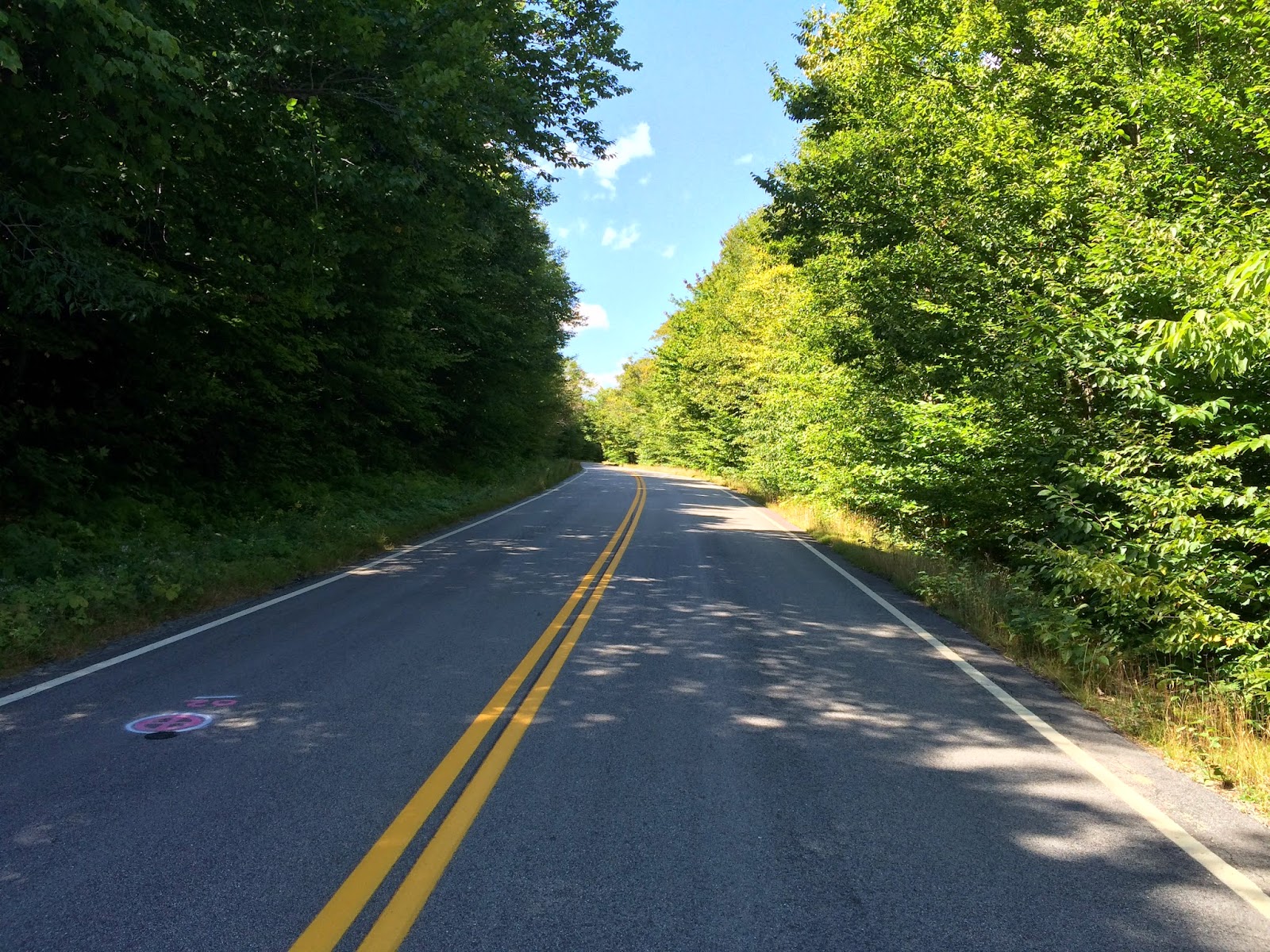 From a turnout on the south side of the notch. 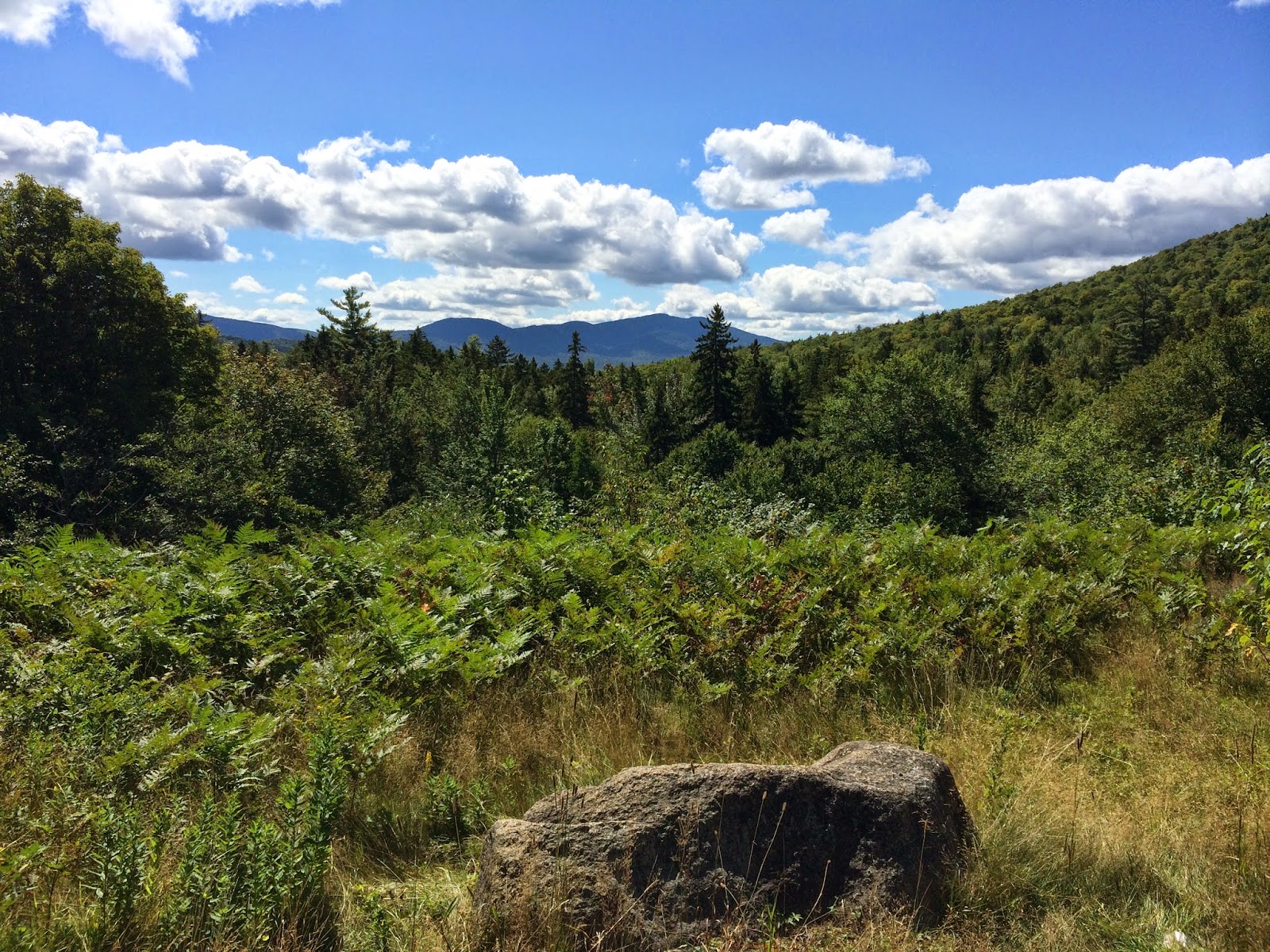 The descent on the south side isn't quite as fast, nor as consistent as north side.  But the good thing about this is that you have a long, mostly steady descent into North Conway.  Most of your elevation is lost on Bear Notch Road but you lose a lot on the Kancamagus Highway, NH 112, which you are on for about 6 miles.  (Sorry, no more pictures of the Bear Notch ride - my iPhone froze.)  You leave the highway at the covered bridge near Blackberry Campground, which takes you to Passaconaway Road, which follows the Swift River on the north side, with the Kancamgus on the south side.  Passaconaway is a narrow road but with little traffic (although it had the foreboding sign, "Yield to logging trucks").  Passaconaway is all downhill and it is a fun, fast section of the ride.  You leave Passaconaway on Allens Siding Road, which takes you back to Westside Road.  This section of Westside, up to River Street, is fast, with few uphill grades. The speed limit is 35 MPH and there is a marked bike lane.  It's a great alternative to getting into Conway and then taking NH 16 to North Conway.

I rode this fairly fast for me, 15.5 MPH and the ride was 40 miles according to my Garmin.  The ascent is obvious in my Garmin stats. 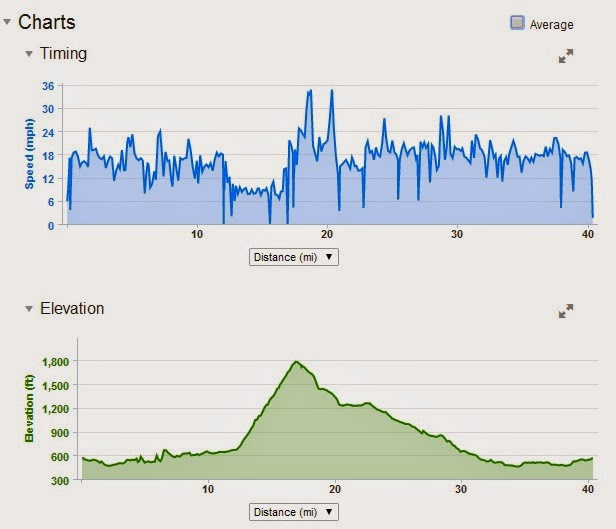 After a family day on Saturday, which included a ropes course at Cranmore Mountain Ski area, I had the chance to get an early ride in on Sunday.  I was interested in riding over Hurricane Mountain Road, which I climbed in 2007 as part of a collegiate club ride which included Bear Notch.  I knew from this experience that the Hurricane Mountain Road was not to be taken lightly.  I was in pretty good shape when we rode this in 2007 and I'm not quite in the same shape today.  I was reminded of what an unusual road this is on the extended family vacation a couple of years ago when we drove up it to walk the trail up to Black Cap, which starts at the summit on the road.  Everyone was shocked that their cars could make it up the road, which is twisty and very steep with short sections approaching 20 percent grades.  This sounds like my kind of road when I am fit.

I left the house at 6 AM with lights on for safety.  I took 16 down to Route 302 then East Conway Road, which eventually took me to Route 113 and into Maine.  Traffic was very light on the main roads, thanks to my early start,  The landscape changed markedly on the east side of the Whites, looking more like Connecticut River farmland with lots of agricultural land in active use.  The road was pretty flat from 16, to 302 to East Conway Road to 113. 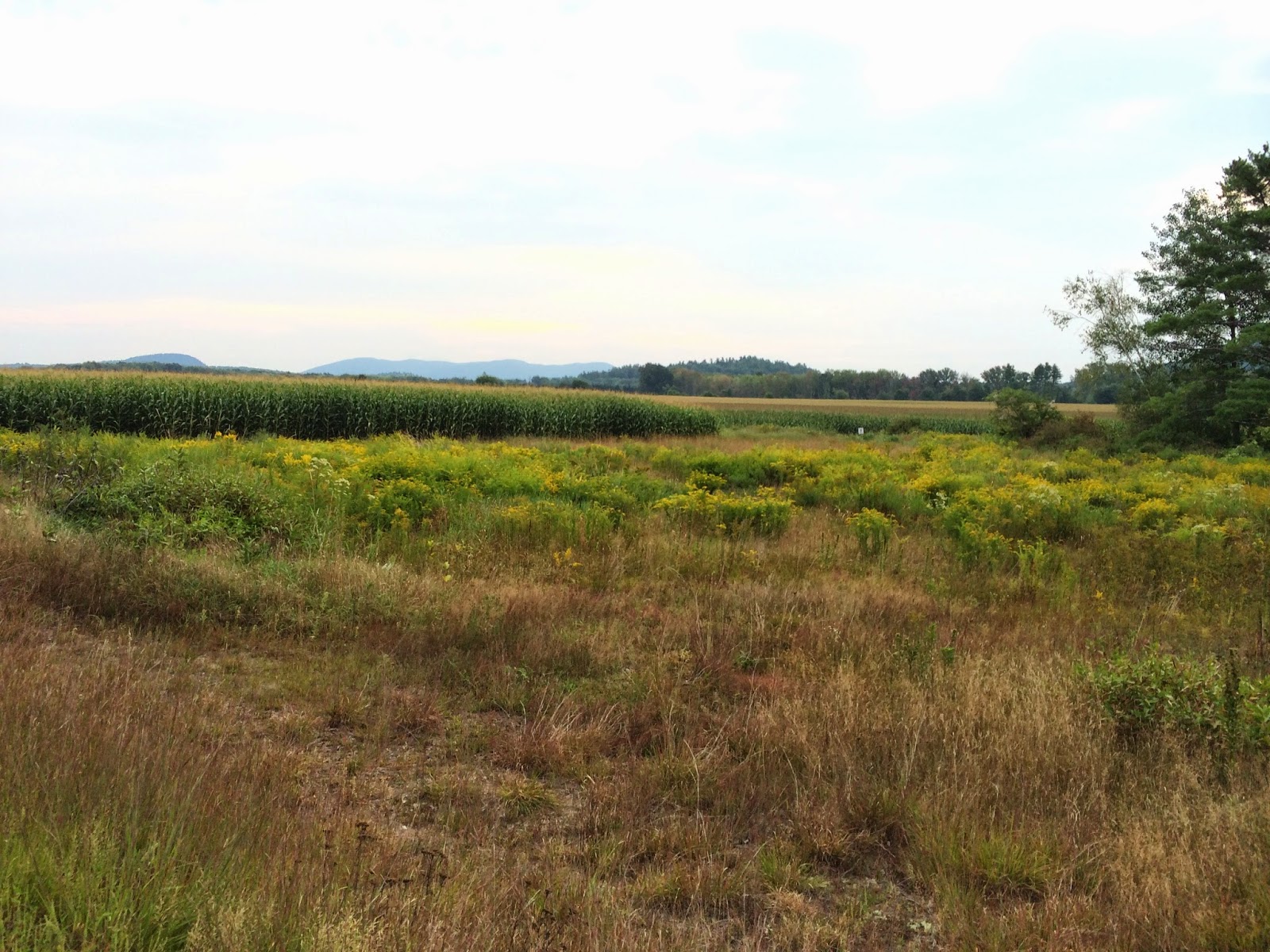 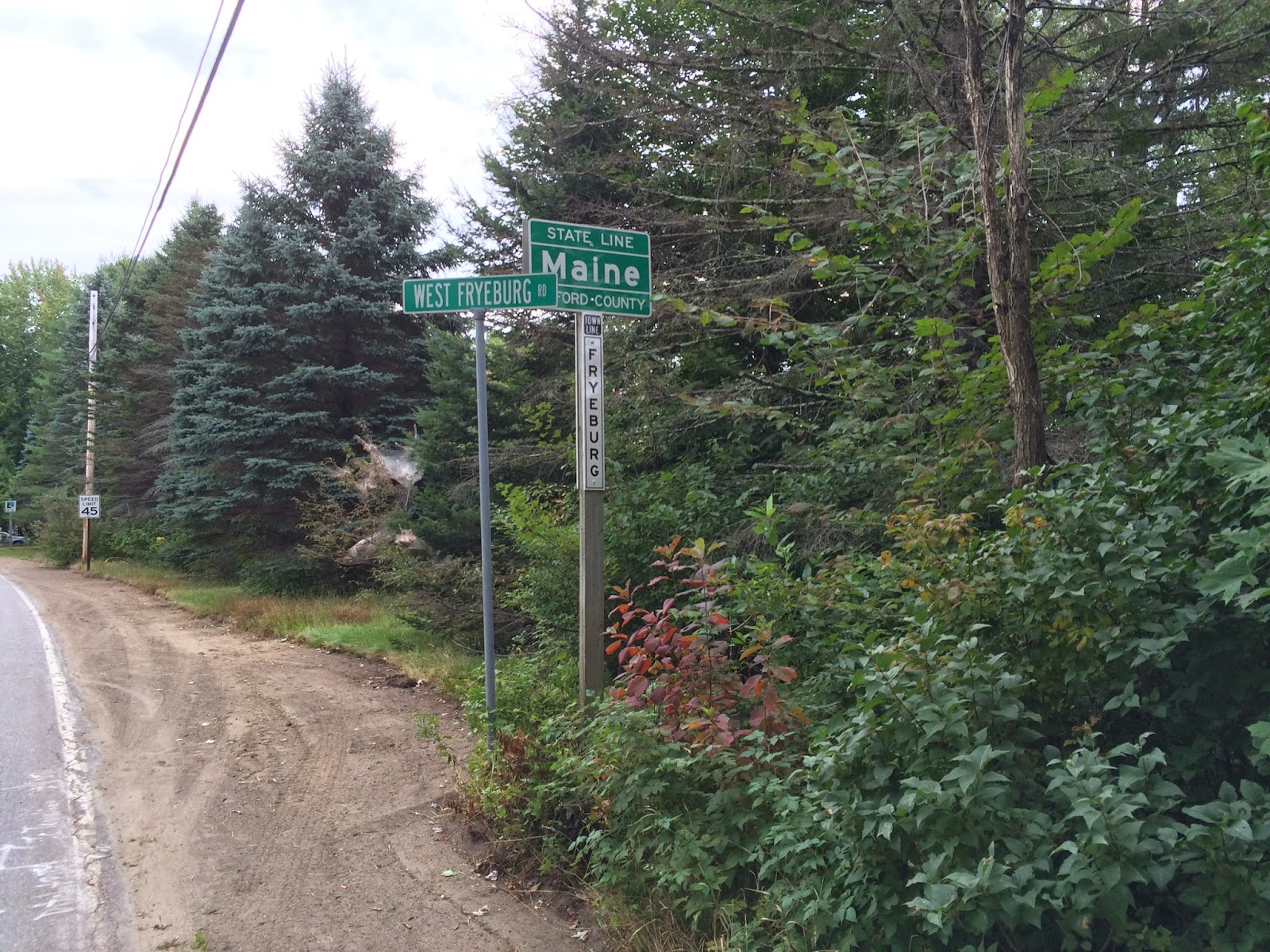 Fish Road, at the intersection with ME 113.  I liked the alternative sign post.  There was a more standard one nearby.  There was also a church at this intersection, which had a much needed portapotty.  I forgot how hard it is to find a place for a bio break in farm country.  Also, note the skid marks on the pavement. 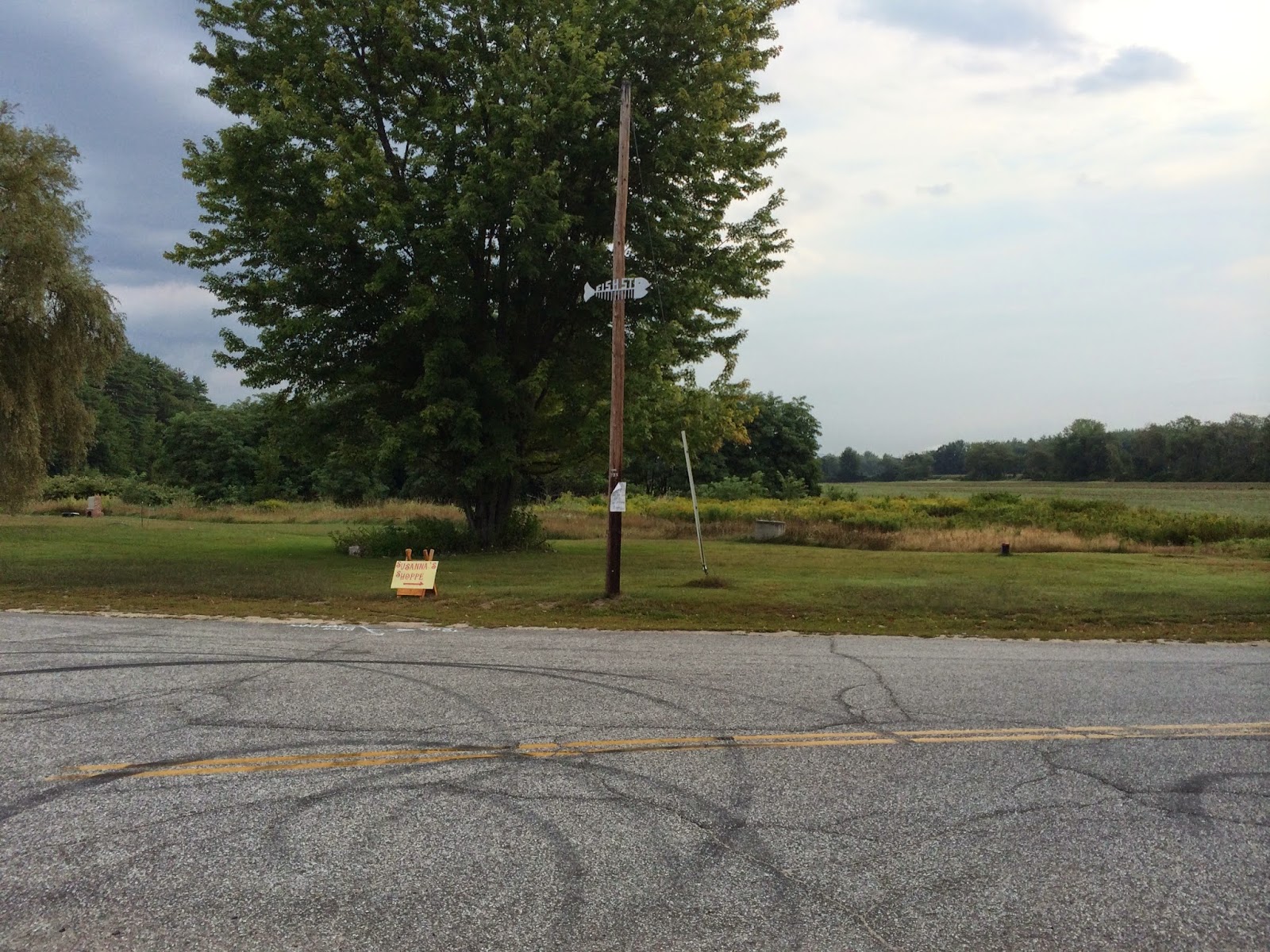 There were significant rollers between  Route 113 and the turnoff to Hurricane Mountain Road and then I saw  this and I knew this was a cycling road.  At least for those of us who don't mind hard to climb hills. 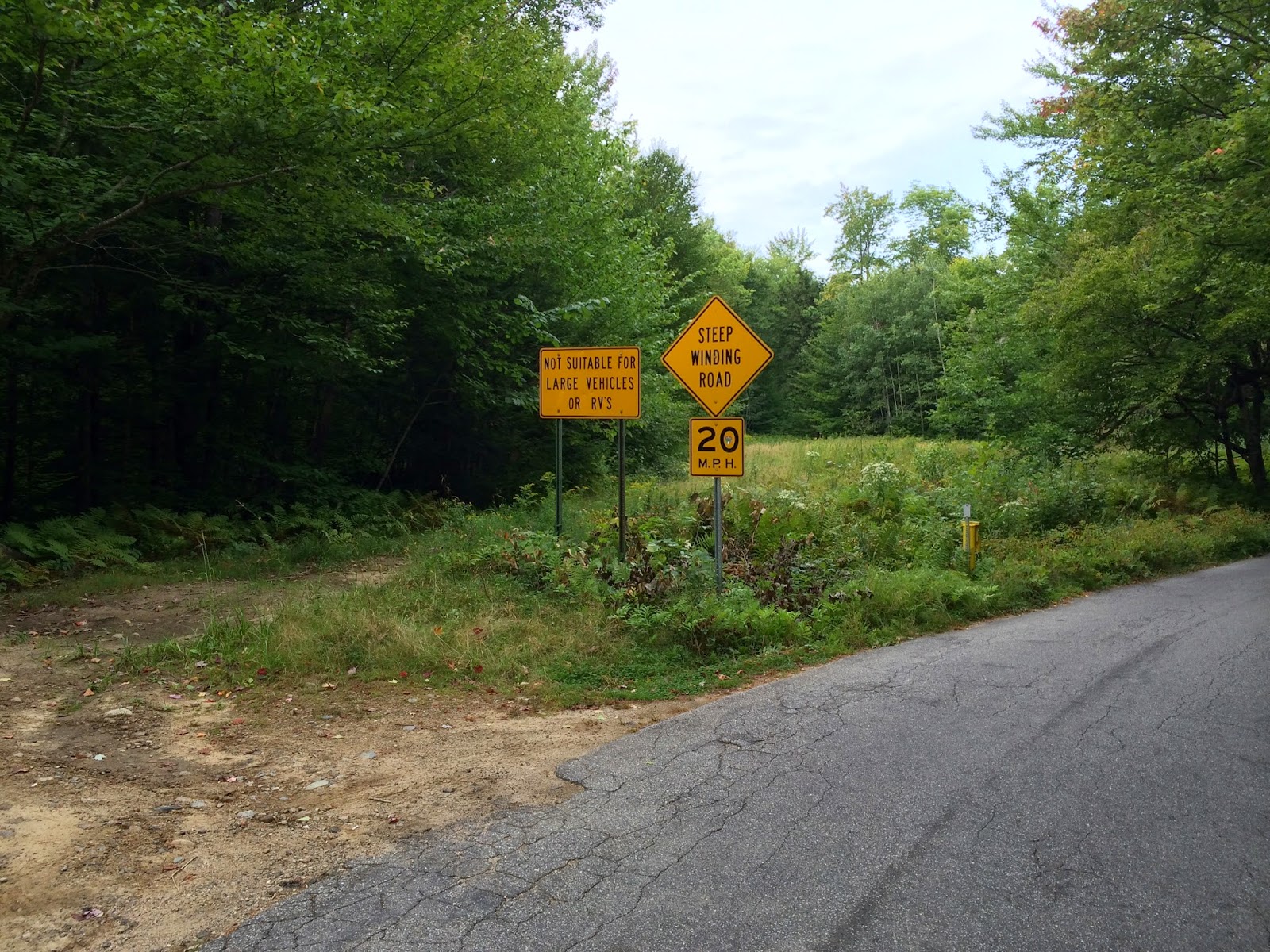 And yes, it is closed during the winter.  I couldn't imagine this road plowed successfully.  What did surprise me were the several homes I saw on the east side of the summit.  There are no homes on the closed section on the west side of the summit, like there are on the east side.  They clearly are summer homes, although one closer to the road looked like a year round residence. 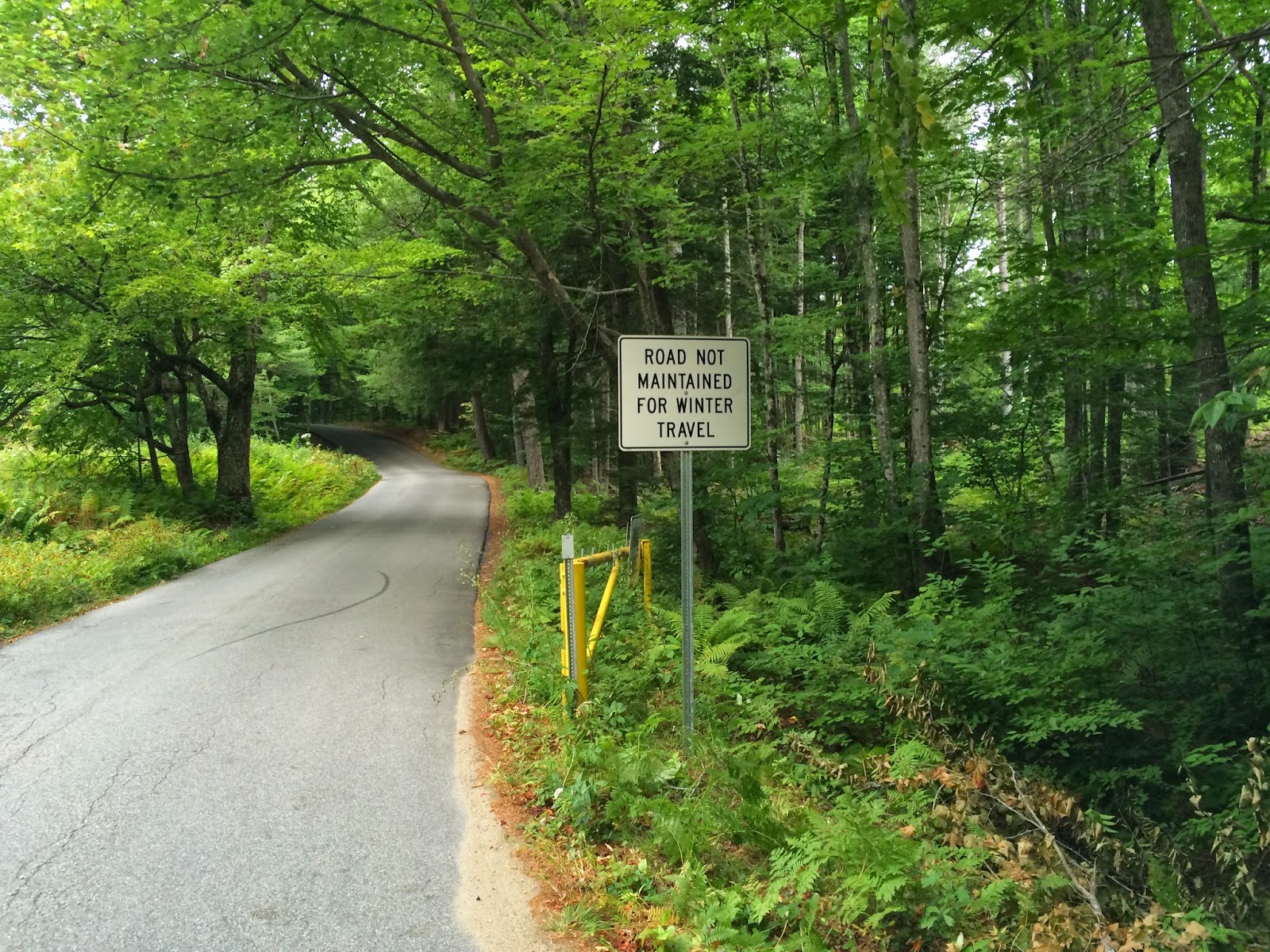 I thought that the east side was the easier ascent, until I saw this sign.  Yes, it was very challenging to me this year, although I that this was due mostly to my diminished fitness level.  And yes, I stopped a couple of times for rests. The road is narrow.  It was twisty enough, and steep enough.  Despite the steep pitch, I never tried to pick up significant speed on the descent.  Again, notice the skid marks on the pavement. I finished this ride inside of 3 hours, with several stops, many of them for looking at a map.  My Garmin was playing very funny tricks on me.  I didn't know this route well (obviously) and wanted to rely on the Garmin, with the Ride With GPS app as reserve, and my memory as  a second reserve (there weren't all that many turns so this was possible for me).  The Garmin never thought that I was on route, except near turns.  This was frustrating and I couldn't figure out if the route (a GPX file downloaded from Ride With GPS) was at fault or if the Garmin was.  In the end, the Garmin route that I rode was properly located on the map, showing were I actually rode so the Garmin was working fine.  I'll check the GPX file that I downloaded by plotting on Google Earth in the next few days.  Has anyone else experienced anything like this? (Update: I inadvertently downloaded the GPX file with turns by accident - don't try this at home on a Garmin 200!)

The Garmin stats show the one significant hill pretty clearly.  By the way, I did turn off the generator for the big ascent.  I needed all of my effort to get up Hurricane Mountain Road. 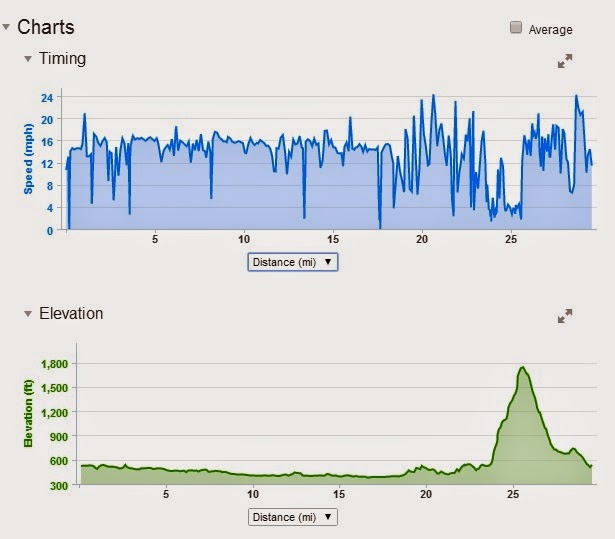 It was great fun riding through some small towns and rural areas in Maine.  This was one of those days that I wish I wasn't so constrained on my riding time, which I wish could be exploring time as well.  Still, having two boys and being on a family vacation, I was very pleased to get out when I did.