Riding an abbreviated version of the Honey 100

Saturday the 13th was the Honey 100, a ride that has the intent of getting you off road as much as possible and, in this instance, of getting you to ride east of Lexington and not west.  The ride was sponsored by Ride Studio Cafe and Honey Bicycles, with the ride starting in Lexington at RSC.  I missed last year's version, which went north and west of Lexington and was more of a long linear pursuit.  This year's version looked more like the Diverged rides that RSC has sponsored.  That is, you never get all that far from where you started but you sure get to find many trails along the way.  I speak from someone who rode the 50K version (and didn't even finish that).  Those who did the 100K might have other opinions.

My ride, with the group, is in red, the complete 50K ride is in black, and the towns are in blue.  I wandered home along the Mystic Lakes to Arlington solo.

The cafe was hopping when I arrived around 7:45.  The fun (that is, the slowest group) 50K group was scheduled to head out at 8 but in the chaos of 140 cyclists in and around a small shop, we didn't leave until close to 9 AM.   Lesli Cohen led the ride with Dan, who lead the RSC Pioneer ride I did in June.  They did a great job keeping us moving and generally keeping everyone within their limits.

I rode my Surly Cross Check, which I was very happy with.  I appreciated the 30/30 gearing, which kept me moving up loose, rocky paths that I thought I were beyond my previous limits.  It was useful riding the Clement USH, a 700x35mm, a tire intended to move between gravel and pavement.   The Surly is my commuter and it felt quite stable on this ride.  One can easily be seduced by the beautiful (and well designed and built) Honeys but this humble Surly build does the job for me for now.

The ride starts out on now familiar trails and roads to Winchester center and then into Middlesex Fells.  Cycling is legal on certain trails in the Fells and while I walked there in the past, this was my first time cycling there.  The trails, as promised, where rocky and rough after the washout of the previous weekend but there were a lot of relaxed stretches of dirt paths as well.  The part of the Fells east of I93 were even nicer than the west side.  There we were passed by a group led by Chip Baker.  In his group where were a lot of folks in orange from Philadelphia, led by Lone Wolf Cycling.  They were at the break at mile 16 or then raced on ahead of us.  The break was great with light snacks, enough to keep my energy level up.  I hear there was a nice lunch for the 100K riders that the 50K riders missed.  And there was likely great food at the finish, which I didn't  get to.  After a precarious start getting out of the house in the morning, I decided to cut my losses and promise to get back earlier than I should have, causing me to bail earlier than I would have liked.  After leaving the group in Winchester, I picked up lunch for my wife and me at Arlington Town Day, then rode home.

"Washed out access roads:  The rain from last Saturday caused some new washing out of access roads and single track.  This means trails can be a bit rockier and looser than some people may expect.  Take extra care on these types of descents, ride slowly and well within your abilities; or, walk your bike if that makes more sense for you.  Riding slow on these is also wise because somewhere along that descent is probably a quick turn onto some other trail so you don't want to risk overshooting the turn.  Take these descents as opportunities to regroup.  Warning:  The most washed out section of the entire ride is in the Middlesex Fells between mile 10 and 12.  If you're more comfortable, please walk the rockiest sections."

We were warned - the road and trail surfaces were as advertised (the above is from one of the emails participants received before the ride).  I still consider myself a novice on this kind of riding.  My bike works my much better these days with my Clement USH (700x35mm) tires and a little bit of confidence.  This ride added to that confidence.  There were a large number of rocky descents and ascents.  It seemed like there were more hard ascents than descents, but maybe I'm better at descents, though I don't think so.  I generally was near the back of our group, which was about 13 people for much of the ride.  People seemed to ride confidently and not need to walk the gnarlier sections (gnarly to me, that doesn't correspond to any kind of universal rating system) so I pushed myself some.  And I was surprised.  After a cautious start, I started trying to get up and down every hill, despite the rocks cluttering the paths.  I believe Rob Vandermark mentioned that the side of these trails were best and often you had to take one side then cross over to the other side of the trail to find the smoothest sections.  I hit a lot of rocks but my wheels carried me over them and I wasn't forced off my bike.  By the end, I felt pretty good about my ability to travel over this kind of terrain, but I certainly won't be doing it solo, or at night, any time soon.  I heard of one crash that shortened one person's ride but otherwise I believe our group finished intact.

Some pictures of the ride

First bridge of the ride, a boardwalk through Arlington Great Meadows.  These were some faster riders doing the full 100K version of the ride that passed our group a few miles into the ride. 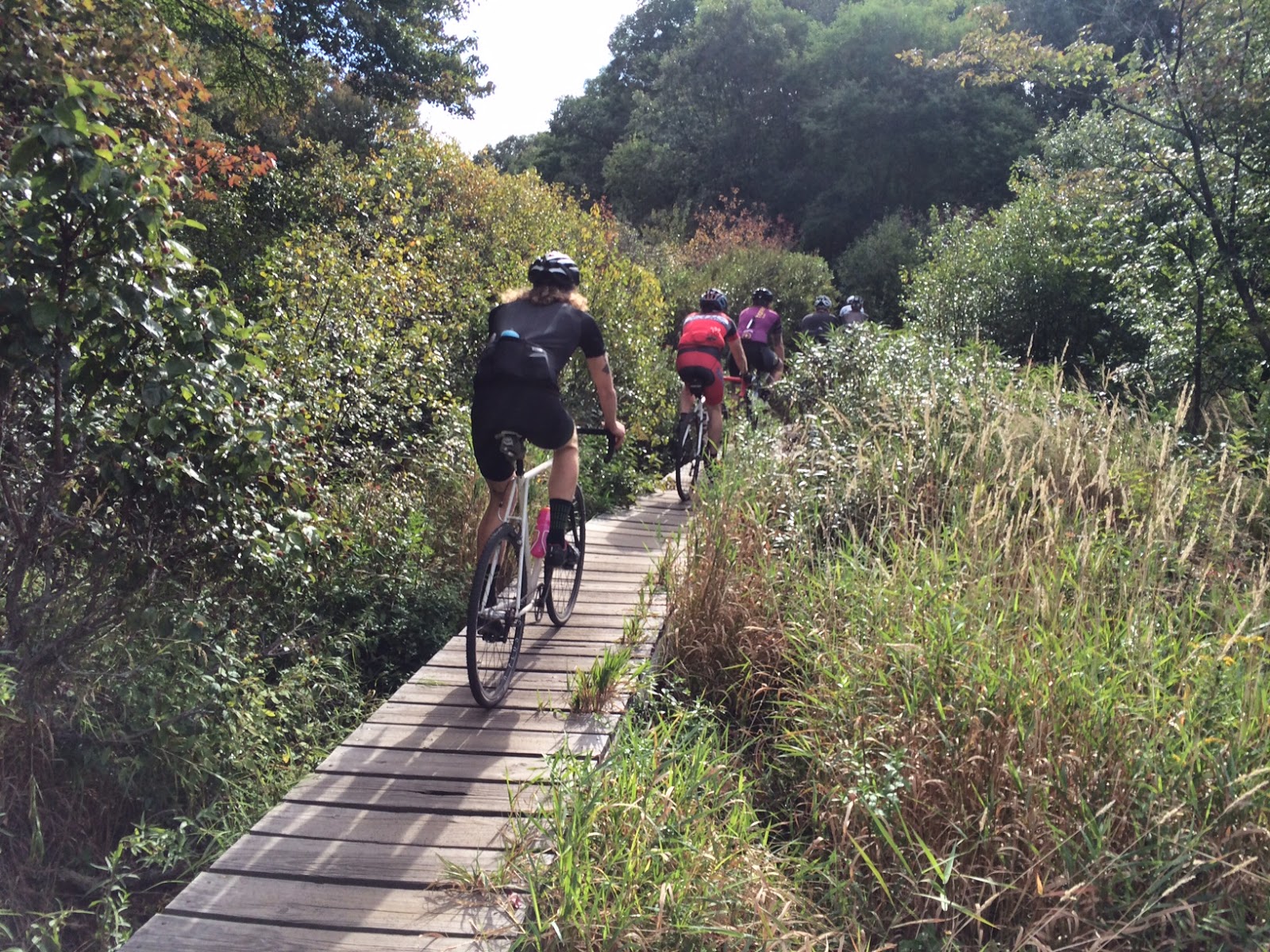 Regrouping along the way on a very easy section of the ride. 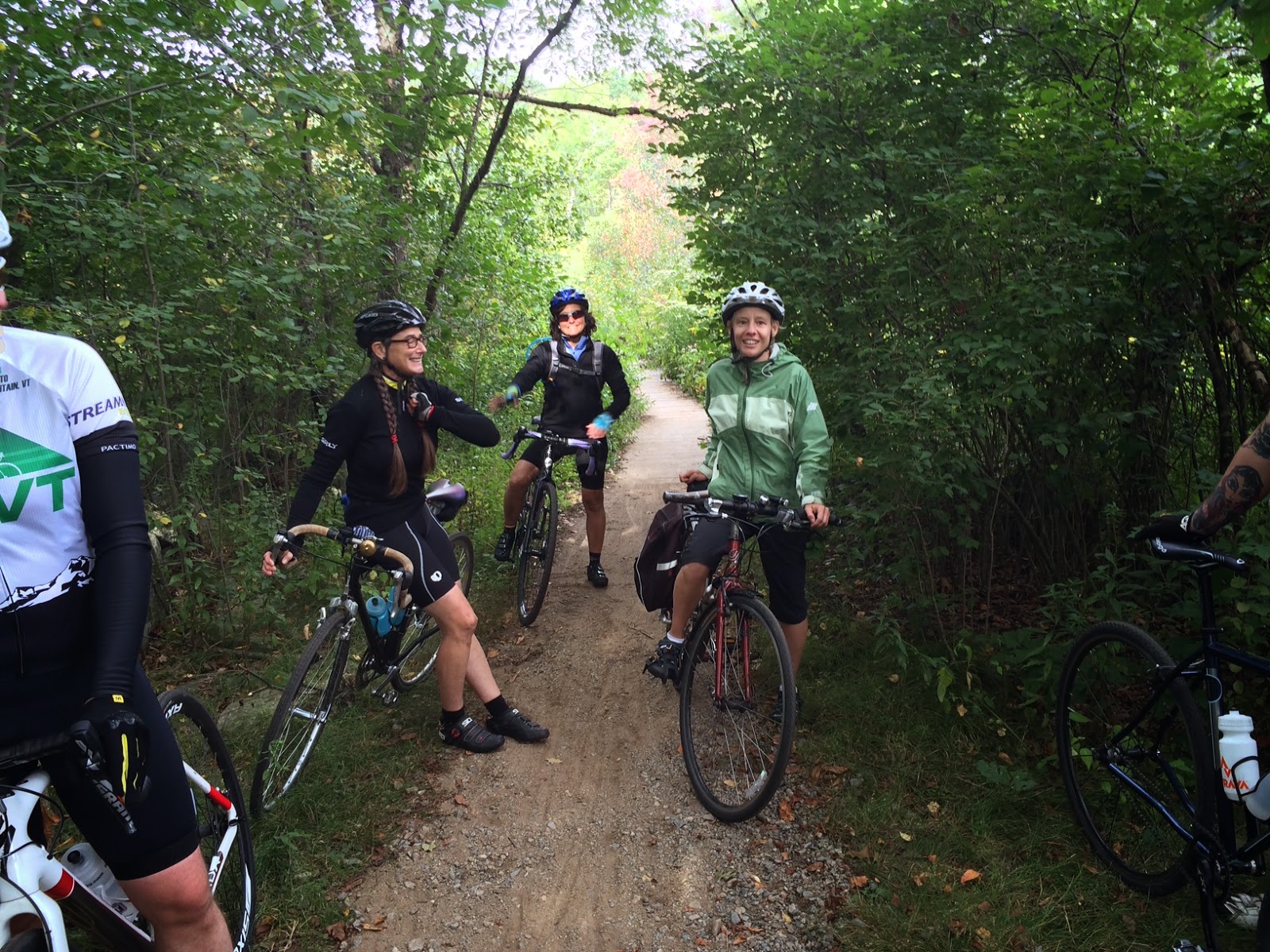 The route took us around the Middlesex Fells Reservoir. 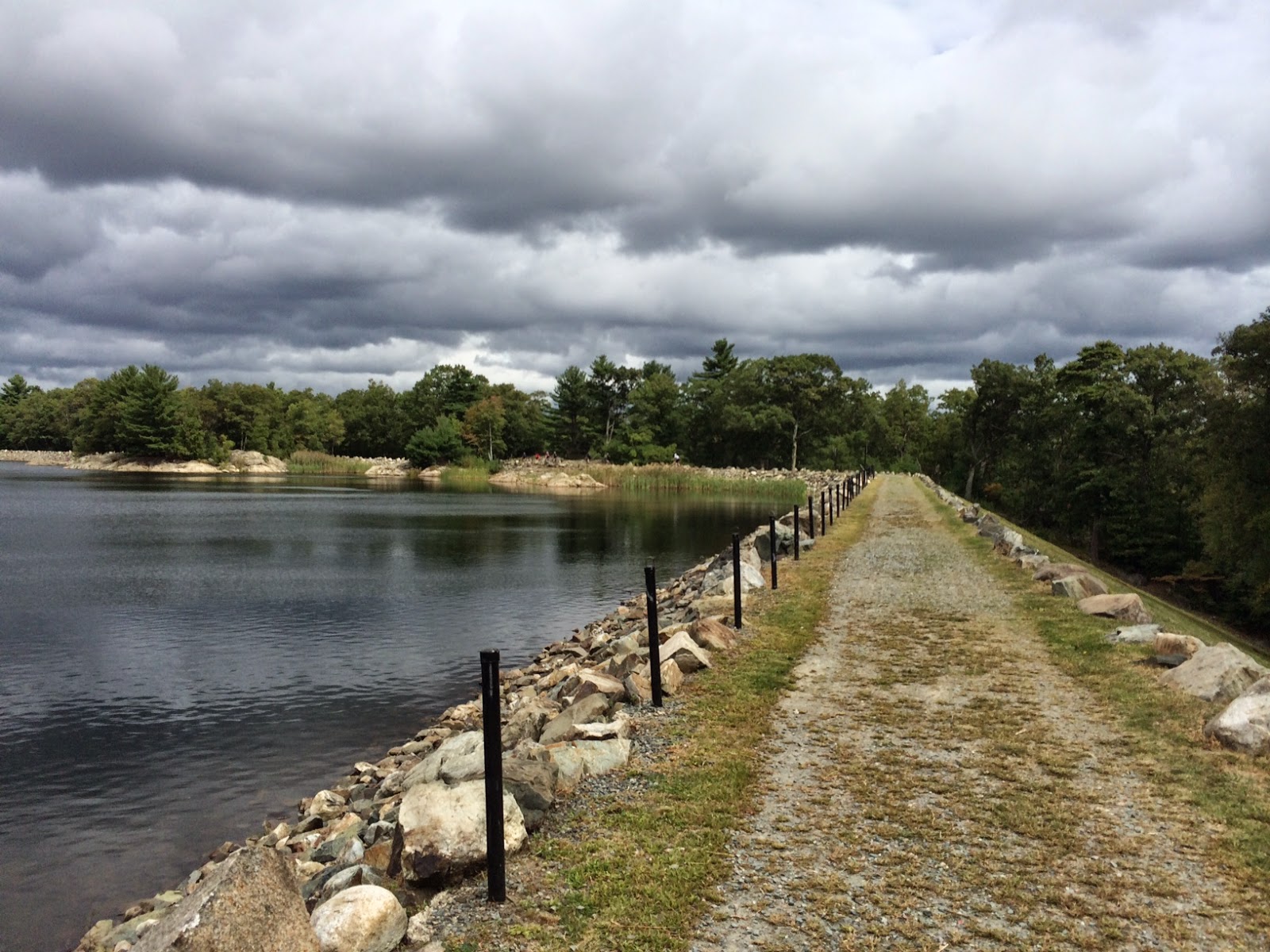 We were passed by a faster 100K group in the Fells east of I93. They were largely from the Lone Wolf Cycling posse and were a lot of fun.  That's Charlie from LWC in the orange helmet.  He was riding a beautiful single speed Hanford and was handing out chocolate. 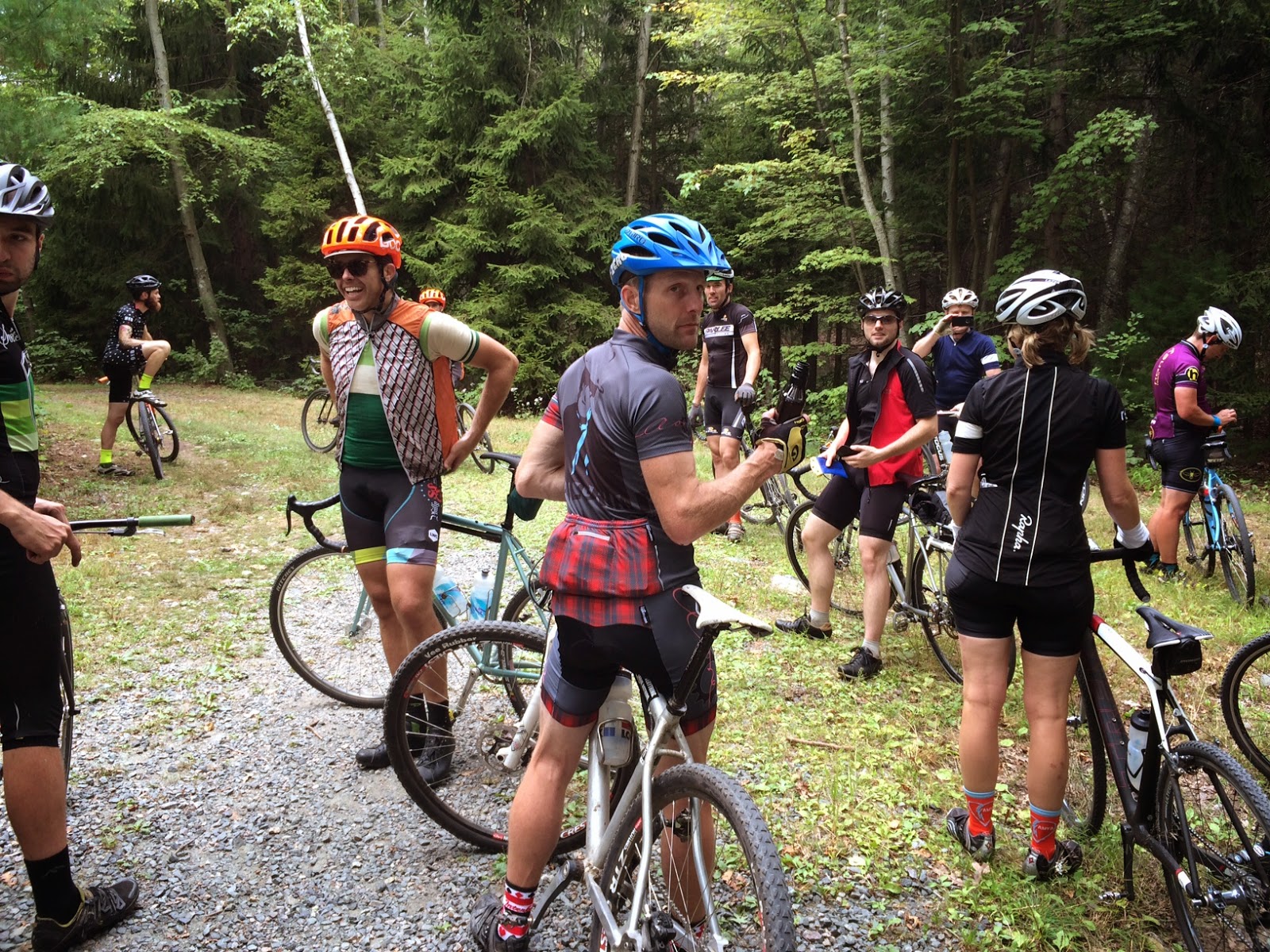 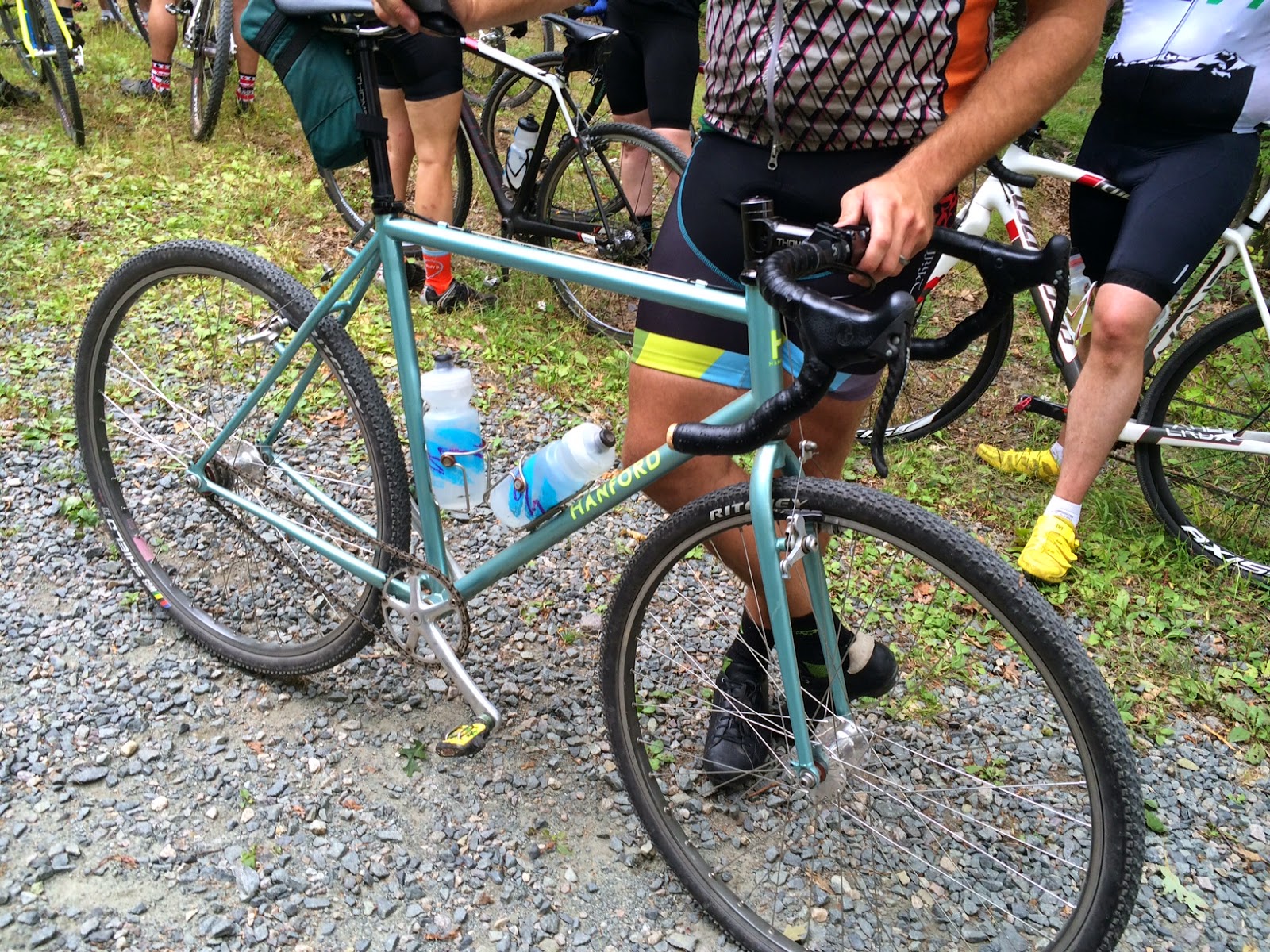 Chip, from Honey and riding his Honey, who lead the LWC posse and did a lot to make the ride happen. 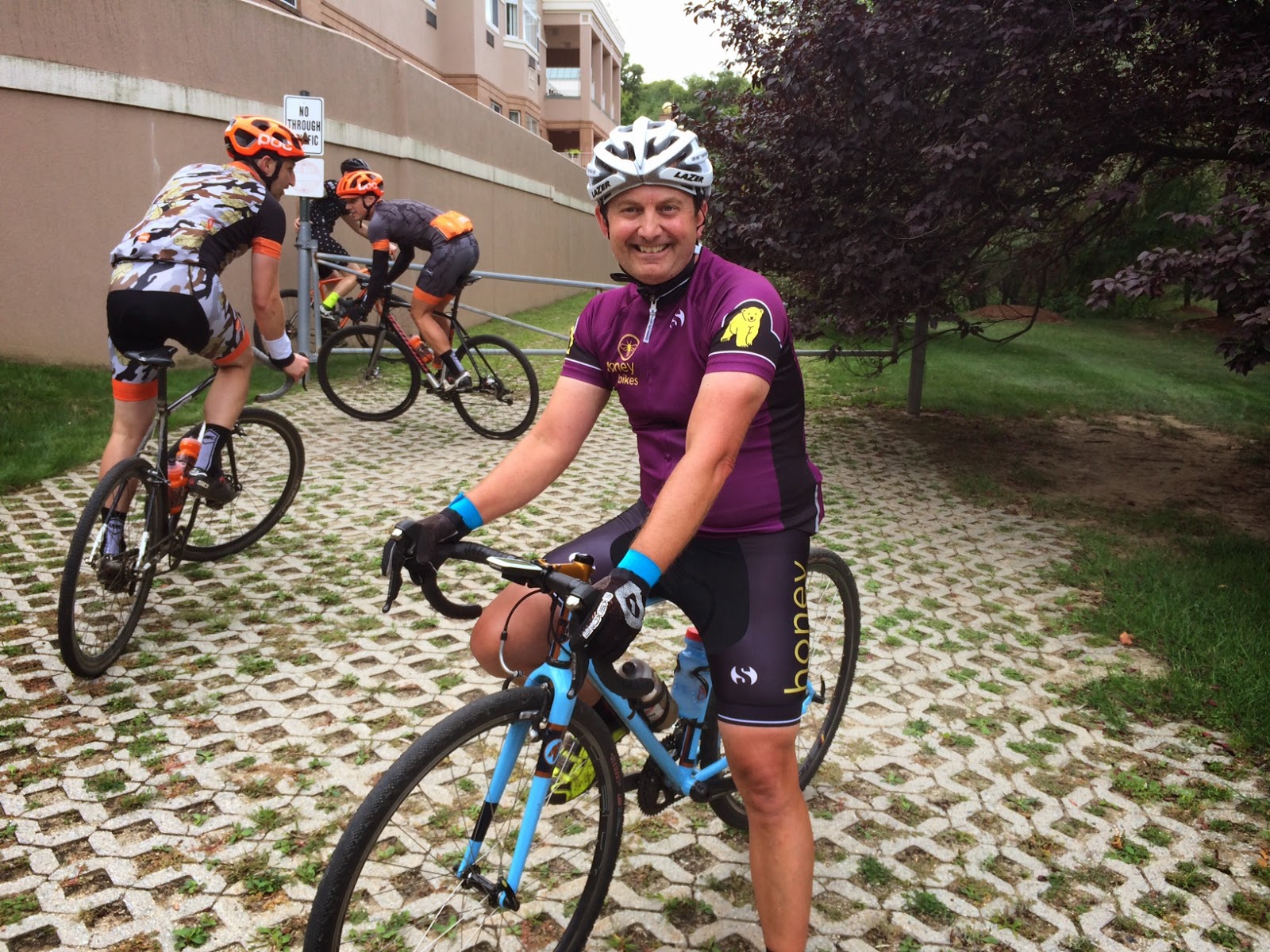 Break time.  Coincidentally, these are the two bikes with generator lighting in our group. 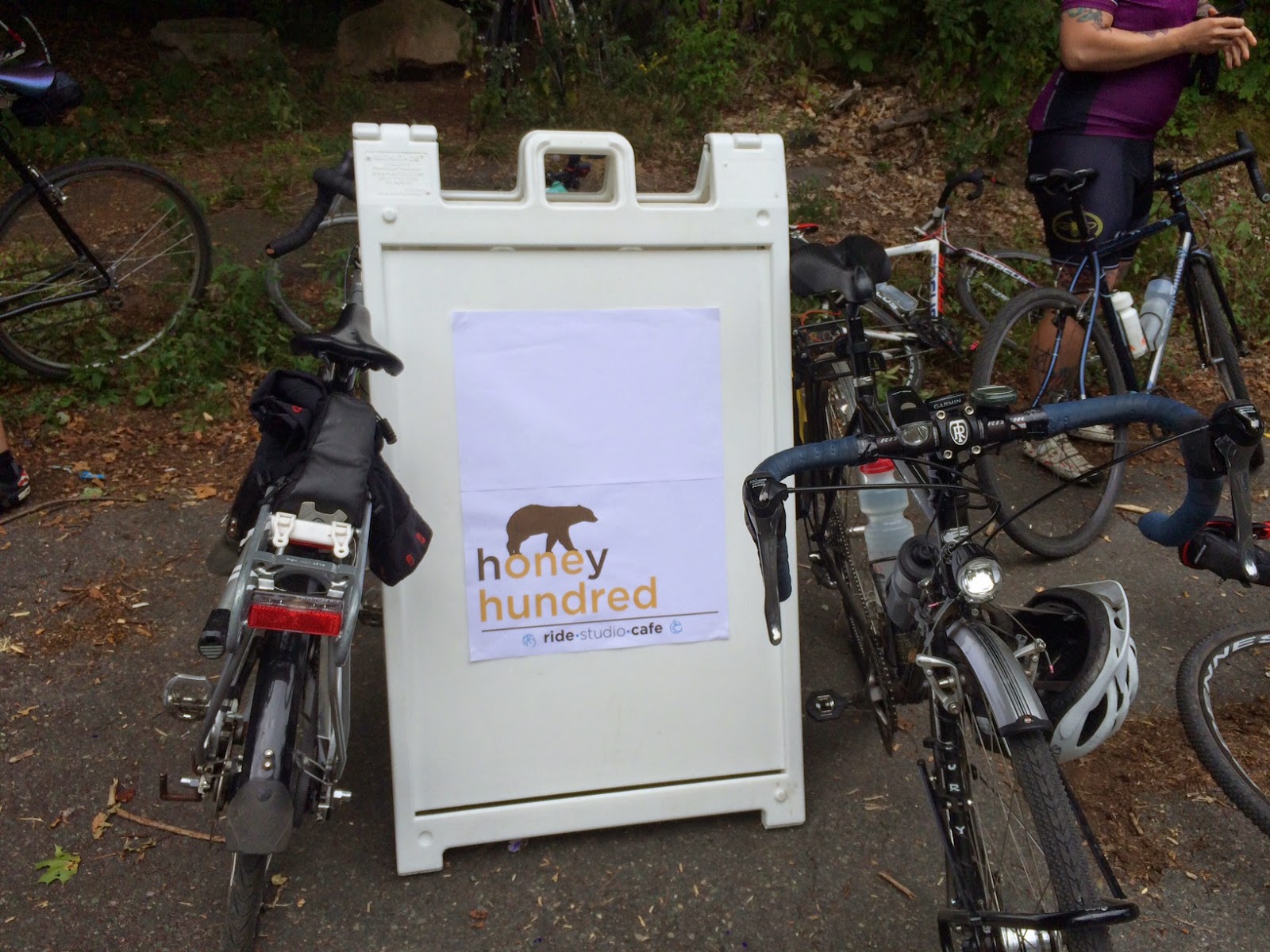 The last of the LWC group taking off from the break.  The drivers of the cars we encountered on the route were very polite and would stop for a group of cyclists making turns and crossing roads. 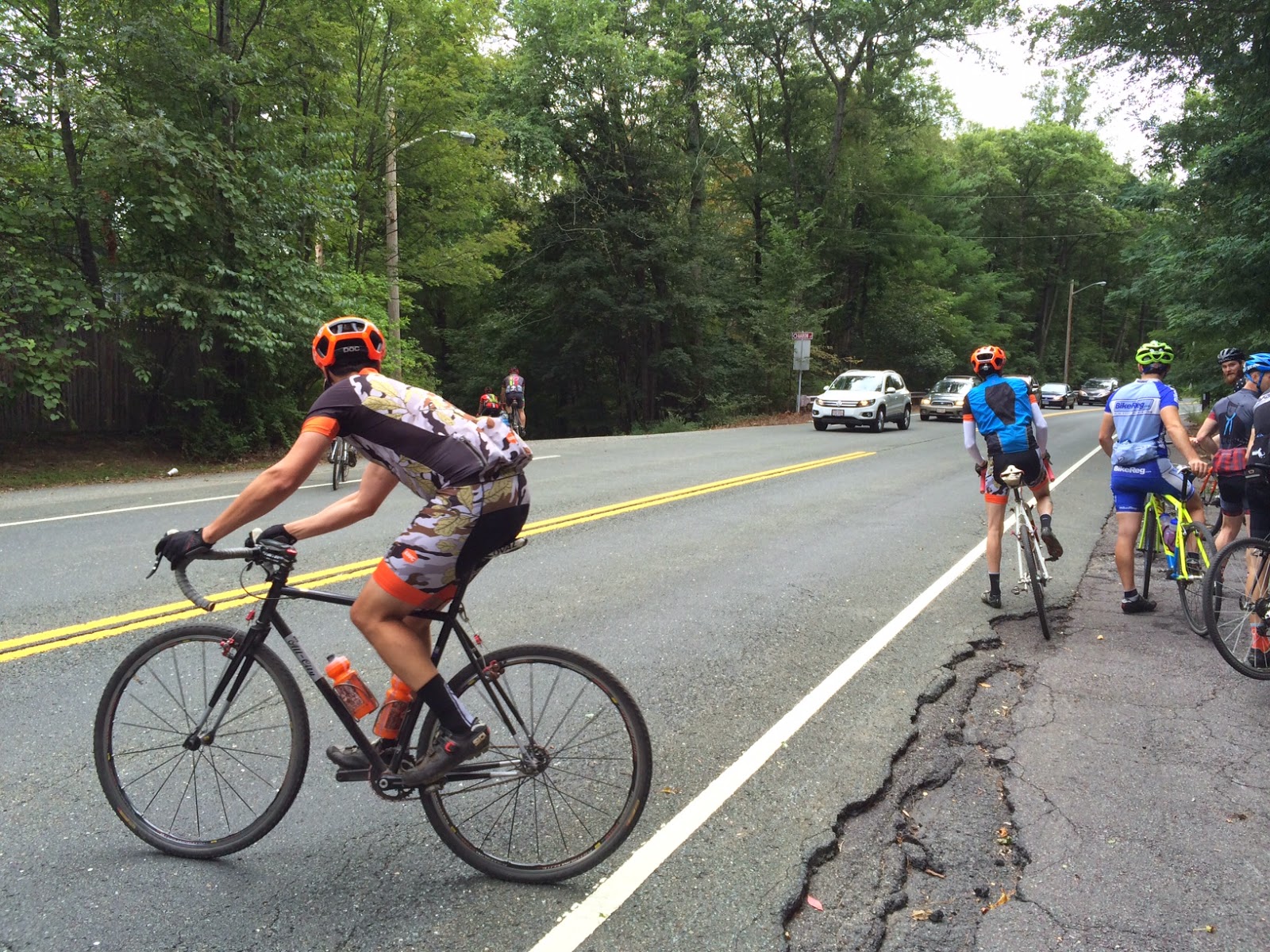 This was a pretty fancy bridge on a trail that crossed between a couple of backyards and ended up on a city street on the other side of the bridge. 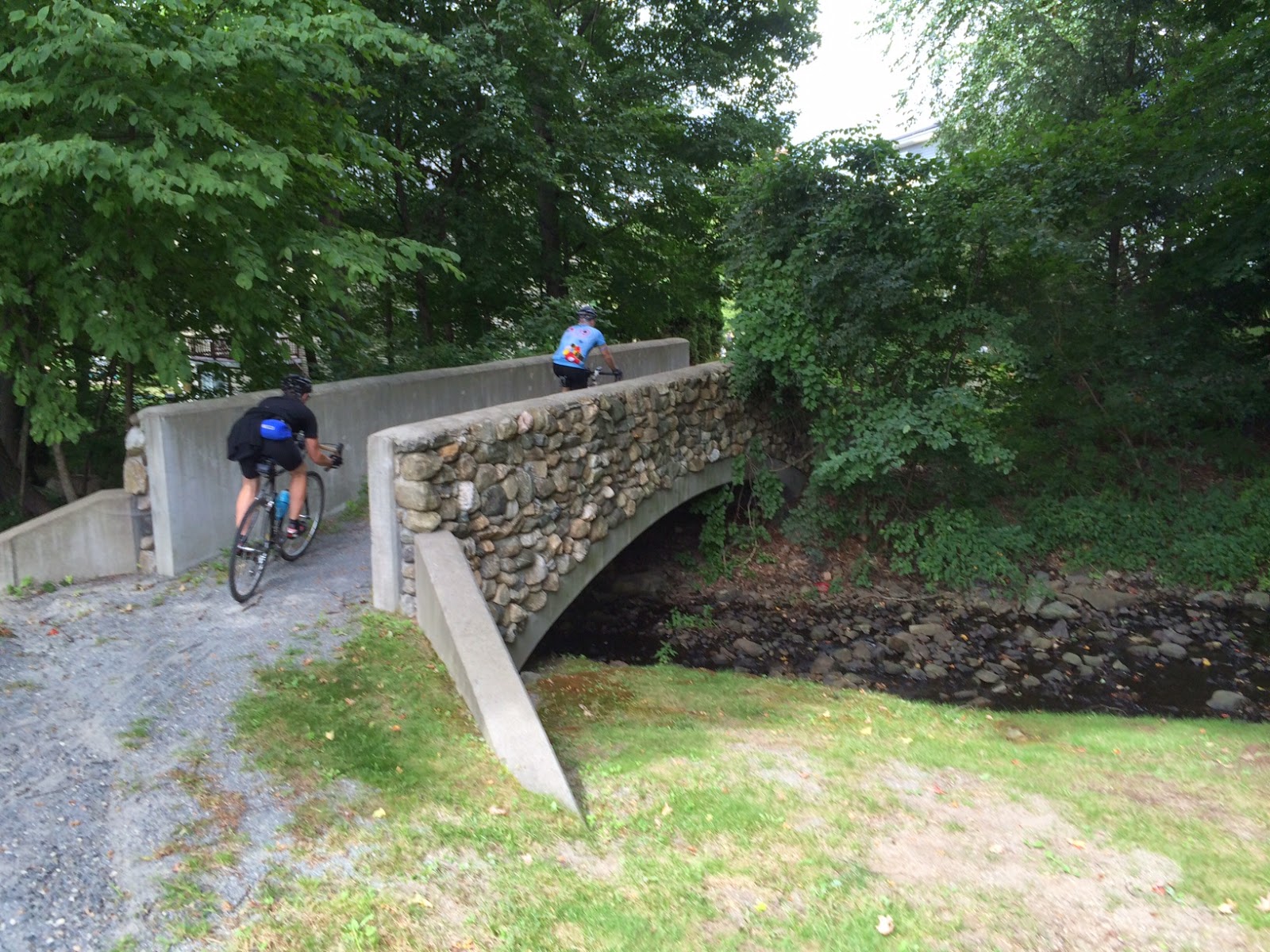 Yes, I rode my commuter and carried my son to school on it the day before the ride.  There is a reason for those front racks. 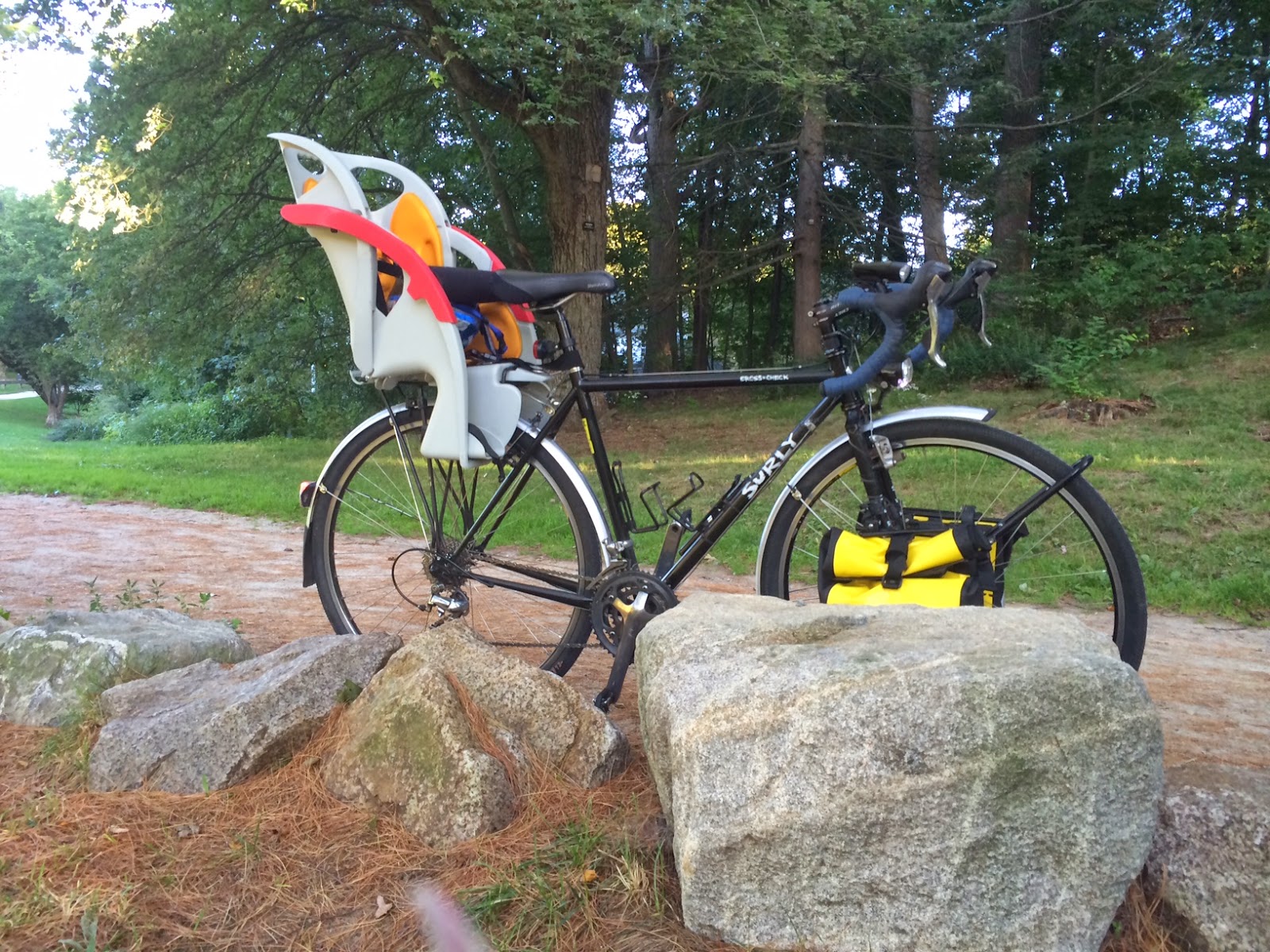