Fall is coming faster, especially out of town.  In town the leaves are still mostly green but out of town it is past peak.  I took a long ride out of town this morning to check out the leaves.

It was an early morning ride - I was out of the house by 5:30 - and I looked for the Leonid meteor shower.  I stopped in dark spots a few times and looked towards Leo but didn't see anything.

The ride was cold but not too cold.  I was well dressed for the coldest parts of the day but was never too warm - I never broke a sweat.

I was amused when crossing Rte 2 at 126.  There was a large group of riders waiting for their light, most of them patiently.  Suddenly have of them took off, blowing off the red light.  One of the patient riders yelled out, "DUDE!", clearly exasperated at his fellow riders' respect for the law.  The light changed in a couple of seconds and they all made it across, as far as I could see.

Sunrise on Pope Road in Acton: 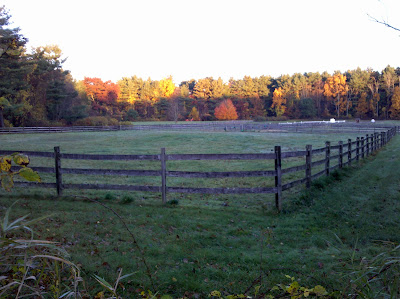 Farmland off of Baker Bridge Road in Concord: 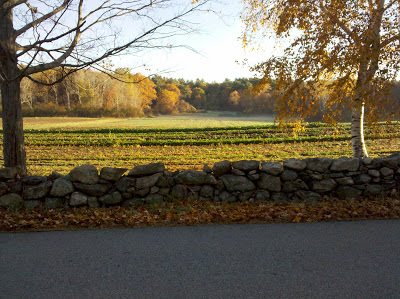 Fall greens on farmland off of Baker Bridge Road in Concord: 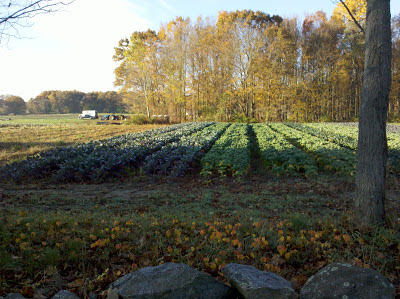 The other pond in Concord, near Walden Pond: 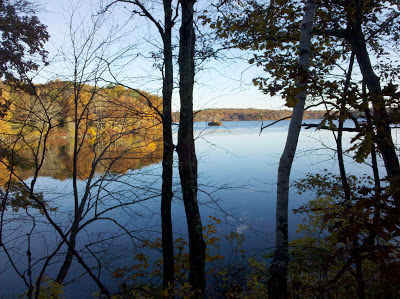 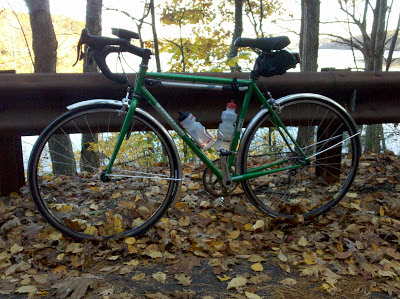 Giant spider at Wilson's Farm in Lexington, part of the Halloween hayride: 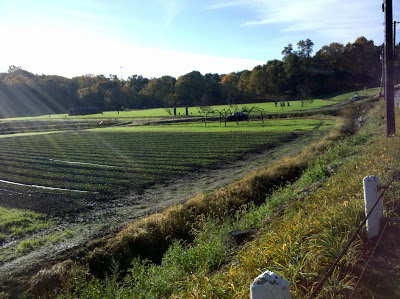 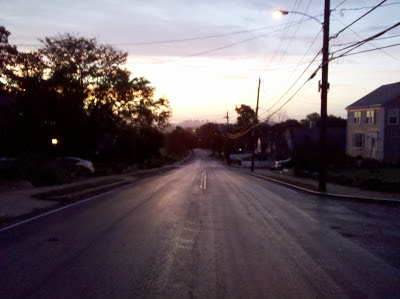 The worst aspect of riding in these conditions in the fall are the wet leaves.  It makes for a very slow ride in the dark.

I have done all of these roads, except for the climb out of the Deerfield River valley to Rowe, Massachusetts.  The descent from Hawley to the Deerfield River can be difficult. The river road north of Rte 2 is only slightly uphill and you pass the east portal of the Hoosac Tunnel.  The road from Monroe crosses the river just downstream from the site of the old Rowe Yankee nuclear plant, which my father helped build.  I can't say that the road above it heading to Rowe is not gravel but I'm willing to try it.  The descent to the Deerfield River on Bardwell Ferry Road is great and the bridge at the ferry is one of my favorite bridges around.  The distance is a bit long but with an early start it should be very possible at this time of the year.

Cooler weather ... all of the time

It seems that there are fewer and fewer nice days to ride - days with sunshine and warm temperatures and no wind.  Yesterday had one element in my favor, sunshine.  It was cool throughout my ride, the max temperature was under 50F.  And the wind, for much of my ride, was 10mph in my face.  Still, it was nice to get outside and move as quickly as I could.  My ride was closely timed.  I needed to get back at a specific time and I did.

The ride was nothing special - out Mass Ave to Rte 2A to Lexington Street into Concord center.  Then Lowell Road to Church St to 225 to Bedford and the bike path.  Mass Ave is difficult on road tires for a stretch in Arlington because of road construction so I used the bike path as a bypass.  31 miles.

That's over 2000 miles for the year.
Posted by New England Bicyclist No comments:

I rode 34 miles this morning, out to Carlisle and Bedford, leaving around 6AM and getting back after 8:30.  It was not a fast ride, like any ride starting out in the dark, and I stopped for a couple of bars along the way. It was the coldest morning yet and I was bundled up.  Weather Underground lists the temperature at 41F at sunrise and that seems about right to me. 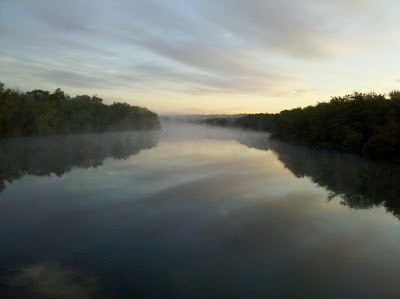 I did my second longest ride of the year, 58 miles, today, which I took off from work.  It is nice to have vacation time.  The loop included my usual run up through Great Brook Farm Park, stopping by the old cranberry bogs, then down to Concord and then south of Concord to Water Row and Glazen Lane down to Weston.  It was the first time in a few years that I rode Water Row and down into Weston, which I did commonly back when I lived closer to Boston (and often rode into Cambridge by way of Beacon Street in Brookline).  Water Row remains a lovely road and worth the mile on Route 27.


The old cranberry bogs just west of Great Brook Farm Park on Curve Street - a lot of people walk out there: 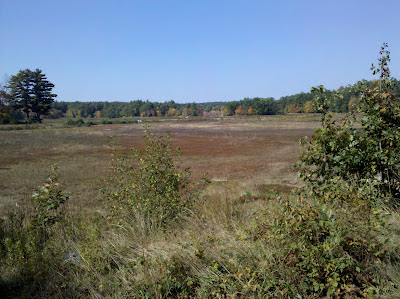 A wetland on the north end of Water Row.  There is a great blue heron somewhere in this picture: 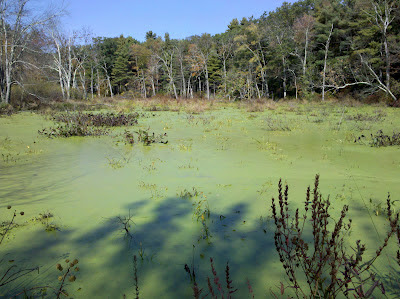 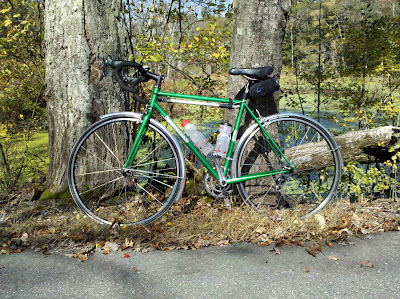 Get out of the rain

This is a prototype of a rigid, popup rain cover that a couple of people are working on.  Not bad for part of a day's work.  A future version will have a clear cover. They would have fenders on this bike if it had eyelets but this bike works for testing.

That people are thinking about extending the use of bicycles is great. 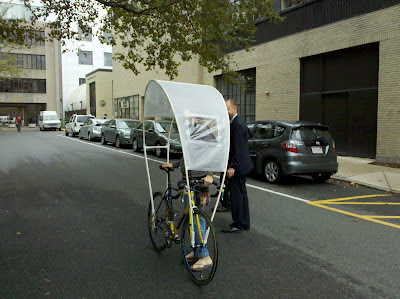 This year has been a pretty good cycling year, mostly because my 2 year old finally started to sleep late. So in the weeks before the summer solstice, I started to get out for early morning rides, leaving as early as 5AM, just before sunrise, to enjoy a ride before everyone else woke up.  I developed a decent routine that didn't much interfere with the rest of my family and gave me sufficient time on the saddle to get in what I think is good shape.  I was riding 120 miles per week through July and August and almost all of those miles were before 8AM.  But in late July a funny thing happened - those early morning rides started to become impossible, unless I had a light.  So I found one, a Nite Rider, that seemed to work for me.  It has one flaw, which is not fatal - it shuts off your wireless bike computer, a known issue.  That is easily resolved by moving the light either to your helmet or to the left side of your handlebars (my computer is set to the right of my stem) .   So I continued riding, often starting rides in the dark and riding as much as 25 miles before sunrise.

Why morning versus evening rides?  There is so much less traffic at 5AM than at 8 or 9PM.  I have been out to Concord by 6AM and fewer than 15 cars passed me in the 12 or so miles on my route.  And those drivers are much less likely to have an after-work-drink in them.  And it fits my schedule.  I have been doing early morning runs and rides for years and my body seems to have no trouble getting out that early for exercise.

It is a fairly odd experience riding in the dark.  On dark roads your vision is restricted to the illuminated oval from your light.  You can look up at the moon in the sky but if you do you might miss the bump in the road, or an animal that is crossing your path, or veer off the road and any of those would mean trouble.  It still is a fun and interesting experience although riding fast is really not all that possible, except on well lit streets.  I did ride over into Lexington for a 15 miler that I did at 17mph, which might not seem fast during the day but it does seem fast at night.  I also did an early morning ride on the bike path in a light rain at 12mph and that seemed fast enough for me.  So you do get a workout but not like you might on a morning in early July.  And on longer rides you experience sunrise and that is never a bad thing.

Might animals cross your path?  It happened this morning, for the first time.  I have seen a million rabbits, some raccoon,  and other smaller creatures, including domestic cats.  They were very aware of me and stayed out of my way and I gave them room.  But today my top tube was hit by something that I saw cross the path from my right in Bedford.  I felt it hit the bike but it did seem to have any heft to it.  It seemed like a shadow, it was so small and was not directly lit by my front light, but I am guessing it was a bird.  I stopped to look for it but saw nothing so I am assuming that it survived.

Besides the light, or lack thereof, there is also the issue with temperature in the early morning.  As the season gets on, morning rides might mean temperatures in the mid 40s, which is close to my limit for a lengthy ride.  I have done rides this fall that I really need a shower after but not because I had been sweating but because I am chilled and need a very hot shower to warm up.  It  is getting late in my cycling season and while there might be a large number of good cycling days left, I might be working or otherwise busy and miss most of theme.  I have plans for at least one ride in Western Massachusetts late this month but that is highly weather dependent: rain cancels and temps below 40 degrees (in the hills) cancels.  So I will continue to  try to get out early as long as I can manage it and try to be ready for those one or two long rides that I have time for.


My bike in Bedford.  I had my light on my helmet today, which is on my rear rack with the light still on.  You can also see the red glow from my flashing rear red light, and reflective sidewalls on my Panaracer tires. I was also wearing a reflector vest and have reflective material on my cycling shows.  I think I am well lit: 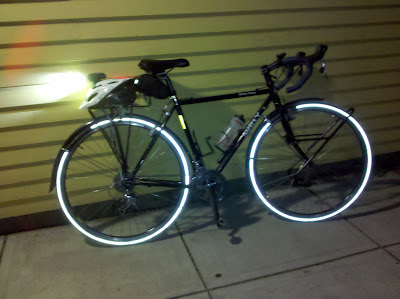 For me the most beautiful part of the day is just before sunrise and just after sunset.  You can't see it in this picture but the clouds were a brilliant orange this morning: 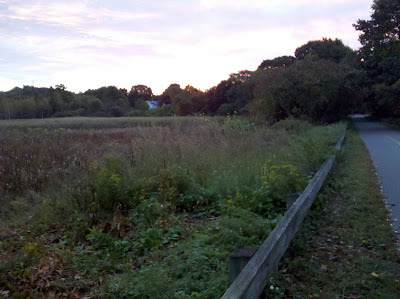