Two festive bikes from the ride: 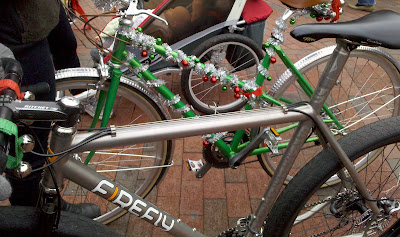 I rode part of the 2012 Jingle Bell Ride out of Arlington this past weekend.  I rode with a couple of friends and two late additions: my two boys.  We never offered the ride to the younger boy because it conflicted with his nap schedule and we wanted to preserve that since we had afternoon plans following nap time.  We offered the ride to the older boy but he declined.  I was leaving with 30 minutes to spare for a 5 minute ride to the registration desk.  Both boys watched me leave.  I was a quarter mile down the street when I got the phone call - both boys really wanted to go and let my wife know that in no uncertain terms.  Wailing might describe their reaction to my leaving the house.  I headed back home and put on the bike seat for the big boy and unfolded and attached the bike trailer for the little boy.  These days the little boy is usually in a bike seat on one of our bikes but he didn't seem to mind the trailer.  My wife helped with getting the boys dressed and pumping air into the trailer tires but I was still late.  By the time we got to Jammin' Java, the registration table was closed up and the ride was about to start.  We just got in line and started out with everyone else.

The ride was fun.  Lots of people - 80 or so - and a few other trailers with children.  Everyone I talked with seemed to be in a social mood.  The pace was slow and we ended up waiting at lots of lights - I think we caught every light on Mass Ave between the bike path and Harvard Square.  The peloton was so slow in getting started that only part of the group could make it through a green light after we all waiting during the red light.  The route was imperfect: the Minuteman Path to Mass Ave in Cambridge then Mass Ave into Harvard Square.  The Mass Ave section was fine in the large group - no one could miss us but I wouldn't want to return that way with the big load of boys that I had with me.  We stopped for cookies in Harvard Square.  The little boy was happily napping by then but the big boy was starting to get cold so we headed home when the group was leaving for Boston.  We followed the rest of the riders to the river path but then headed back towards Arlington while the group went east.  There wasn't much traffic so crossing Memorial Drive with two children and a trailer in tow wasn't at all scary.  We took Mt Auburn going west then cut across to Huron Village and Huron Avenue and then got on the bike path around Fresh Pond.  From there we took sidewalks to Alewife and then the bike path into Arlington center.

The most interesting part of the ride was seeing/hearing Luke wondering where we were.  He is very spatially aware, like his dad, and tells us when he recognizes places that we've been before and recounts what we were doing (bike rides vs driving vs running).  He was definitely lost on the way from Memorial Drive to Alewife.  He let me know that he was never in the those places and he was generally right.

With that ride, I have now been out for at least one ride in 10 of the months in 2012 (I didn't get out in February or March, not that it wasn't possible given our mild winter).  I had boys with me in both the January and December rides.  And I have actually topped 2200 miles (2202 to be exact) rather than just rounding up to 2200 as reported in a previous post.

How the year went

Life has been busier and busier with the two boys so while I hoped to ride a lot this year, I couldn't really expect to do.  The year started out slow and I didn't really start riding until the younger child could sleep late.  He started to do so and I started to do ride when he did.  That sleeping late was 7AM and that started right after the summer solstice.  That meant I could leave for a 25 mile ride after sunrise and still get home before the little guy woke up.  I started almost all of my rides by 5, even after the sun failed me (I started riding with lights, reflector vest, and a lot of caution).  I continued this pattern late into the fall and this is what my year looked like, by miles:

Everything after July 1st would not have been record breaking for me but would have been a very decent year.  Still, 2200 miles was beyond an optimistic goal for me.  I also ran 350+ miles, most of that in the first 4 months of the year, and had a reasonably good finish time in the Feaster Five run on Thanksgiving (8 minute miles), even though I didn't put on more than 50 miles since May.  I also used our trainer in the basement for about 20 hours in the late winter and early spring.  I didn't start until February this year and already started back on it for the winter.  Not that I am abandoning running; I ran 6 miles this morning.  I'm hoping to keep up both cycle training and running all winter and maybe, just maybe I will get some skiing in this winter.  I was invited on a half marathon ski race this winter and I'd do it if I get a trip or two in before then ...