A little vacation ride to Truro on Cape Cod

Reading about some of the fabulous rides that people have been taking this summer, I might be feeling left out with one long ride on a family vacation.  But that's what you get when you have kids.  We made our choices and those choices led to less time for bicycle adventures.  But I did have one day, or at least one morning for a ride.  My goal was to check out Ballston Beach, where you can see the lowest section of dunes along the Gulf of Maine side of the Cape, at least north of Eastham.  The ride turned out to have minor adventures, including 2 miles of dirt, and sometimes sandy, road surface and a portage over Ballston Beach.

We were staying in Chatham, not far from the Cape Cod Rail Trail extension.  My wife has gone on a bike ride or two in Chatham and was wary of me riding the roads around there so, despite my early departure, I followed the bike paths to its northern terminus, and that is where the ride started to get interesting, although I did see a fox in Harwich: 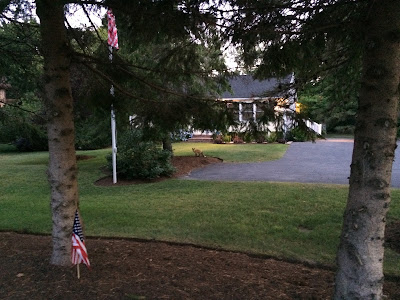 The rail trail is in pretty good condition.  I remember riding it some time before 2007 (on my old Lemond Alpe d'Huez) and thinking that I needed more cushioning the next time I rode it.  So for the past several years I brought my Surly, which now sports 35mm Clement USH tires, for the trail, and to haul one or the other of my boys on a trailer or a bike seat (on  the rear rack).  But I have been using my new 3 speed for hauling my boys (now on a trail-a-bike) and my Surly is in the middle of repairs so I took my Independent Fabrication Club Racer.  The main advantage of that bike is that it is faster and the fit is perfect (which is what you get with a custom bike).  It has lights and small bags  that allow me to carry food, a lock, sunscreen, and room to stow no longer needed clothing.  The trail was also very quiet that that hour.  I was off the trail and at the first Wellfleet town beach on Ocean View Road by 7AM and I saw very few other cyclists.

At the ocean on Ocean View Road: 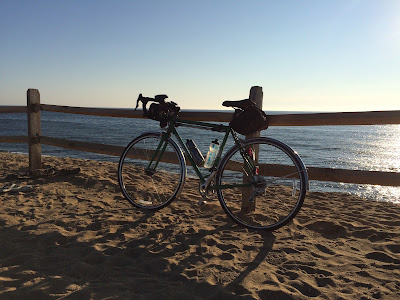 While on Ocean View Road, I met another cyclist, who was confused by me asking about getting to Ballston Beach and she said it couldn't be done.  I was a bit nervous but decided to trust my Ride With GPS route.  I found my turn and it was where it was promised but I failed to check whether or not it was a decent surface for a road bike with 25mm tires.  With nothing to lose but time (and the possibility of actually seeing Ballston Beach) I gave it a try.  The road was largely passable at first, with some sandy spots that were difficult on my narrow tires.  Turns were easy to spot while following a bread crumb trail on my Garmin GPS.

A section of dirt  road: 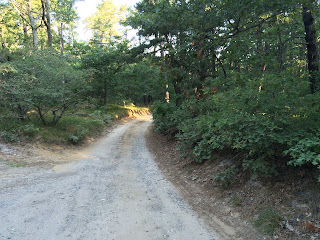 One difficult spot was near the site of Wellfleet's first school house.  The road was more of a trail that sometimes felt like something Rob Vandermark would love but then I might have felt differently if I were riding on USH tires. 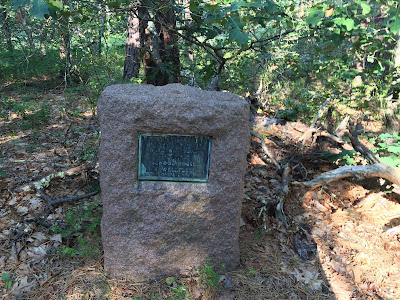 I finally made it to a paved road, Old Kings Highway.  This led to South Pamet Road, which led to the beach.  I confirmed this with a cyclist I met coming south while I travel north.  She happened to be from Cambridge and had been exploring what is left of Old Kings Highway in that section of the Cape.

The suspect road surface - some of these rocks are big and the surface was rough: 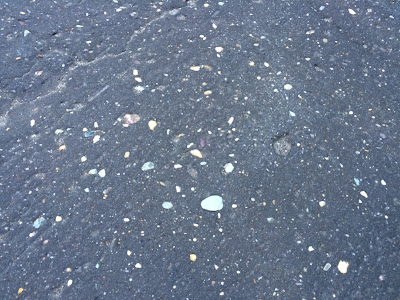 The beach was, of course, underwhelming, except for the ocean itself, which was pretty impressive.  There were some nearby houses that were still standing, although I wonder for how long.  The 2013 and 2015 breaches were documented and look quiet impressive.  This video from 2013 shows the waves coming in.

Looking at the breach from the north.  The small dune that remains is visible in the video linked above. 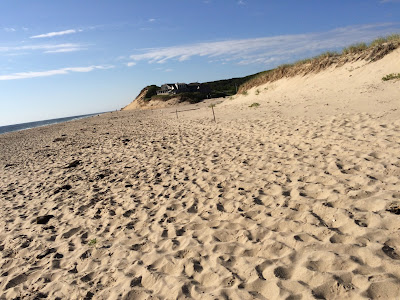 A precariously sited house north of the breach: 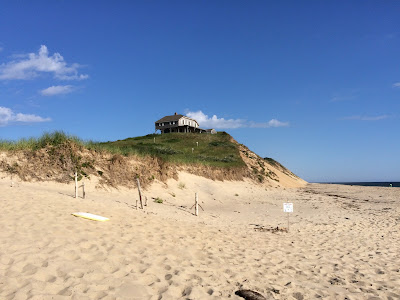 Photo op.  Yes, I did carry my bike down to the beach, along the beach, and out to a trail: 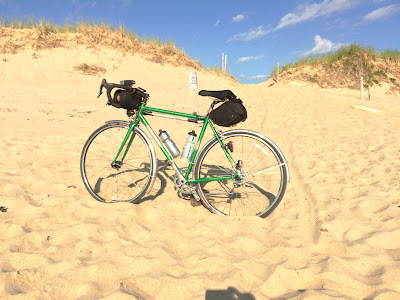 The road heading back to Rte 6, North Pamet Road, is beautiful.  There is a youth hostel very close to the beach and would make a great first stop on a tour from Provincetown, assuming you weren't traveling all that fast. 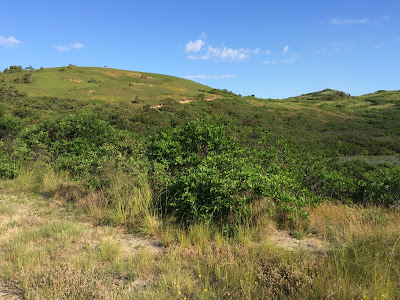 From Rte 6, which I passed under a bridge, I followed what I think is a well know route from Truro to Wellfleet.  I met a couple of other cyclists, Jonathan and his son Sam, and rode with them into Wellfleet before they turned north back to Truro where they were staying.  They took me on a different path in that gave a new (to me) view of the harbor.  It turns out that John and I spent time in Woods Hole together.  We never met but knew some of the same people.

A selfie with Jonathan and Sam: 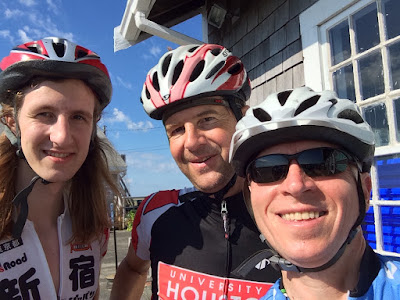 From Wellfleet, I made my way back to Ocean View Road, which has a much better ocean view heading south: 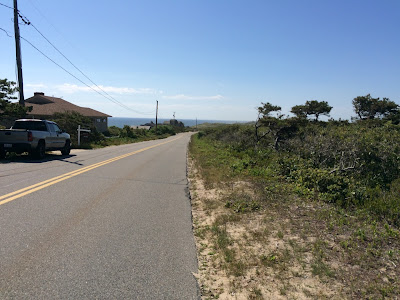 After lunch, or breakfast in Wellfleet, I made a minor detour to see Rock Harbor, one of my favorite stops in that part of the Cape.  The tide was out but it was still beautiful. 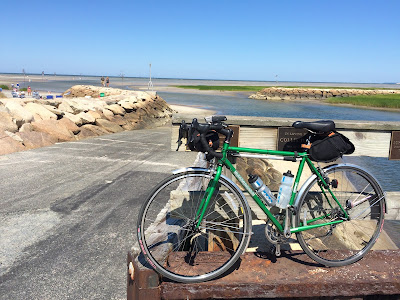 The ride was 75 miles for me, which was my longest ride of the year.  It felt great riding, especially when Jonathan, who is a Cat 4 racer, pushed me while riding into Wellfleet.  I was home by noon.

That ride wasn't my only Cape riding but the rest was riding my 3 speed with one of my sons or their younger cousins, all of whom loved getting a ride in the neighborhood.  One even figured out that the gears work on our new to us trail-a-bike.

The remainder of the week was fun, even if it didn't involve riding.  We enjoyed a big party with part of my wife's extended family.  Two of her sisters and families were neighbors for the week so there were always kids around.  We also were on the water twice, once on Goose Pond on rented paddle boards (which are much more relaxing on flat water than on the ocean) and a double kayak.  The second time my wife's uncle, who lives in the area, took us past Chatham Light Beach into the Gulf of Maine.  On the way we saw a thousand or so seals basking in the sun on a bar that was covered by 6 inches of water.  All in all, it was a great vacation and I was pretty happy that I had a chance to get one long ride in.

One word of warning - don't try to start and finish your ride at Marion's Pie Shop - there is very little parking there.  But do stop in for a pie or a cinnamon roll.