Don't take this review so seriously or don't read it as a review, just as one person's experience.  I don't write a lot of reviews and while I have a lot of opinions, I don't necessarily have a lot of experience to base those opinions on (about 80,000 miles of riding over my lifetime, which may seem like a lot but consider that John Bayley has ridden 20,000 miles in a year).  I did write this review of the Clement USH.  I likely wouldn't have picked the Clement Strada LGG tires if I had not had a good experience with the USH tires.  It hasn't been all roses but I had a generally very positive experience with those tires.  After I wrote that review, I had my first flat on those tires, coming on the first evening after daylight savings time so I was riding in the dark.  I since had two slow leaks, one on the 2015 D2R2.  The tires are a bit loose on both of the rims that they are mounted on - Mavic Open Pro (19 MM) and Mavic A719 (23 mm) requiring a lot of checking so that the tube doesn't burst when I inflate the tire with a bit of tube hanging out.  That said, I'm still very happy with the tires, which now have over 3300 miles on them.  I had a great mixed terrain commute this morning with a friend who was riding a mountain bike with front suspension and had to dismount.  I stayed on my bike and just picked another line.

Lovely Bike said in her review of these tires that her three most important features are speed, comfort, and durability.  Mine are slightly different: affordability, puncture resistance, durability, and comfort.  Call me cheap but $80 or $90 tires are over my budget.  And buying tires frequently will also break the bank.  Ride quality is important but I wouldn't compromise on durability over a softer road feel.  I like Jan Heine's ideas on wide tires but the Kool-Aid hasn't affected me completely, yet.  I have the 25 mm, 120 TPI version of the Clement tires.  My IF has room for the 28 mm but my current fenders make that size a tight fit.  Had I had the money for, say, the Portland Design Works City Fender, I would have tried the 28 mm.

For the record, these tires are on my IF (Independent Fabrication Club Racer).  The bike weighs about 20 pounds and I ride with 2 water bottles and carry a small u-lock on longer weekend rides, just in case I have time to stop for coffee.  I weight about 160 pounds.  I've been riding on these tires for about 1300 miles now and have a decent feeling about them.  They replaced a set of 25 mm Michelin Krylion tires, which I rode for about 3000 miles.  Those tires, in turn, replaced the original tires that my bike was built up with, 23 mm Michelin Krylion tires, which I rode for over 7000 miles.  The latter were nice tires but I blew out two sidewalls in the first 2000 miles of riding them and had a third flat on them.  Once my bad luck ended, the tires were great, if a bit fast on wear.  I don't think I ever got close to 3000 miles on a set and only then with frequent rotations.  I didn't do much better on the 25 MM but the comfort on the 25 mm was noticeably better on them than the 23 mm tires. 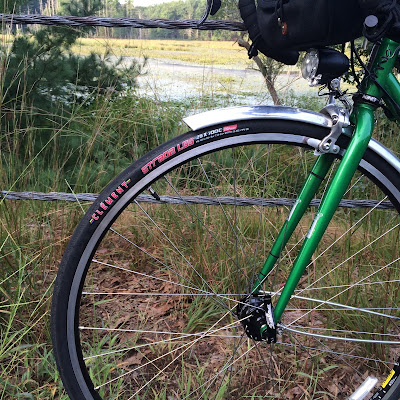 Now that you know where I am coming from, here is what I think of the tires.  First, the tires are a true 25 mm tire mounted on the Mavic Open Pro rims (19 mm width).  They are, however, a bit narrower than the Michelins that they replaced. 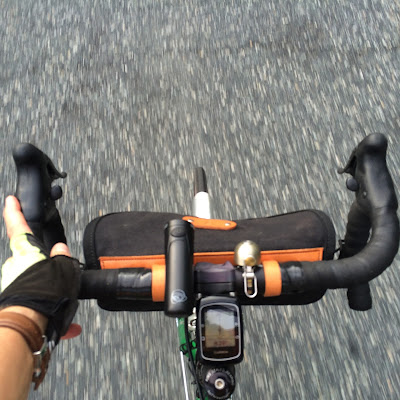 I read a tire review that Clement tweeted in the last year, about a ranking of tires that placed the Strada LGG at the top of the list.  The tires were described as very good, not spectacular but very affordable and a great deal for the money.  And that's about what I would say they are.

The tires just about disappear when I am on the bike.  The road feel is great with a significant damping of the bumps, making the ride less harsh (not that my steel IF is all that harsh to begin with).  Another way of saying this is that I don't feel much unless the road is rough.  That may be a product of my riding style: I slow for potholes and try to relax my body as I go over the ones I can't safely avoid.  Handling on corners is great for a cyclist like me.  I feel a lot of confidence on corners and haven't yet felt like I was about to slip.  If anything, I feel like I can lean more when I want to.  I haven't had these out in a real rain so I can't talk about wet weather handling. And the tires feel fast.  I didn't notice and change in going from the Michelin 23 MM to its 25 MM version to these 25 MM tires.  I suppose Jan might be right about speed and tire size for riders like me.

I don't ride on dirt on this bike often but the tires do well enough, especially considering the tread.  I managed to get through 3 miles of dirt and sand on a ride on Cape Cod this summer.  I was definitely cautious, checking out the sand, but otherwise the tire does well.  Also, I often test out trails that are found frequently on my local routes.  I don't take them far but the bike rolls over the terrain easily enough.  I do avoid rocks in these situations.

The wear has been fine - the tire tread and center look new, if a bit discolored by time on the road.  Flats?  None so far (knocking on wood).  I have driven over some glass and rough roads but the tires have have done well so far.

These tires are great for road rides on reasonable roads, which is about what you find outside of Boston.  I would not take these tires on my commute, which sometimes takes me on brutal road surfaces.  The Clement USH does well on these roads so no need to test the IF and the narrower Clement LGG.

What's next, once these tires are retired?  I will see if I can fit the 28 MM version of these tires with either my current Velo Orange fenders or the PDW fenders.  I would love to try the 32 MM version, if they make one in the future - I've heard that they had a test version out there but haven't seen one on the market.  That's assuming I could fit one on my bike, this one or a new bike that I have planned for 2018.  But I would be happy with another set of these in 25 MM if that's all I could fit on my bike.

[9/28/2015 Update - riding on gravel roads]  While I didn't get these as off road tires, I do end up on dirt and gravel roads on some rides.  I rode about 4 miles on dirt and gravel last weekend on this ride, between miles 40 and 45.  The tires did do well enough and I made it through flat free.  I'd be more apt to ride gravel on this kind of tire if I had the 700x32 version that saw some press at the 2015 Interbike show.


Some reviews of these tires: