I finally made it to Ride Studio Cafe for a coffeeneuring stop but even this ride almost didn't end up as planned, due to heavy early AM fog.

It was an early cold start to the ride, 35 degrees at 5:30, when I left but it least it was clear.  Wait, it was clear until I passed by Arlington Great Meadow in Lexington, MA.  The fog in this area was not unexpected but it remained foggy once I was past the meadow.  And it was foggy after I passed the center of Lexington and after I passed 128.  I was cautious and rode slowly past the Bedford High School towards Route 62.  By the time I was there it was getting light and the fog was lifting and I didn't feel unsafe in the light traffic, most of which was heading toward Bedford so I went on, instead of returning back to town on the bike path.


There was fog off in the wetlands that you pass on Virginia Road on the way to Hanscom: 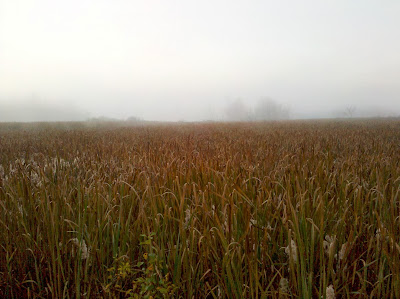 And it was foggy out on the Cambridge Reservoir but it was otherwise clearing: 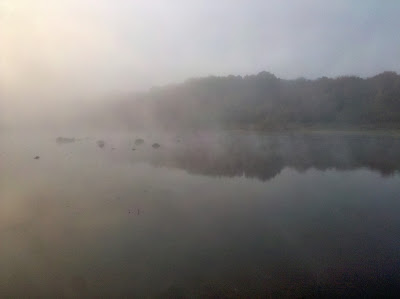 And Ride Studio Cafe was open when I passed by so I stopped for a pour over and read a recent issue of Bicycle Quarterly.  For those who haven't been here, RSC is filled with great bikes, mostly Honey and Sevens, and has an indoor rack that can get crowded on weekends, but if you are lucky, you get to not lock your bike, or not worry about having an unlocked bike outside.  The coffee is great, either pour overs made for you or espresso drinks.  The pour overs can take some time - they purposefully pour them slowly - but are well worth it.  And the staff, both the cafe side and the bicycle side, are very nice and knowledgeable.  I once had an espresso with a friend after a ride and the barrista gave him a great lesson on how she makes espresso drinks.  I was entertained although I'm a lot less of a coffee connoisseur than my friend, as evidenced by my coffee, below, adulterated by milk: 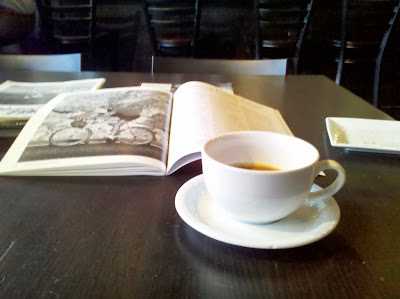 After the ride I took the boys to watch my wife in the Tufts 10K.  We saw a lot of women on the course as well as a few men.  The boys eventually saw mom and gave her a high five as she passed by. 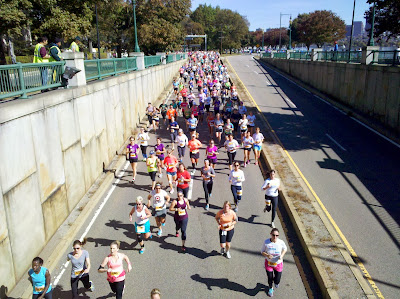 Miles for the month: 160, miles for the year: about 2650.
Posted by New England Bicyclist